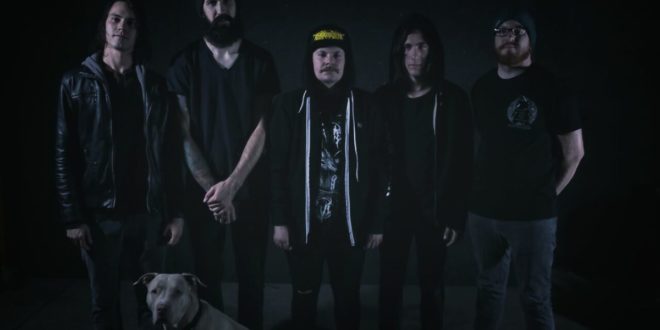 Salt Lake City metal act Dethrone the Sovereign have returned with their sophomore LP Harbingers of Pestilence, a record that continues the bellicose nature of their previous EP. While 2013’s Autocracy Dismantled was indeed a hard-hitting piece of progressive metal/technical death metal, it was obviously on the shorter side, clocking in at just 21 minutes and likely left listeners hungry for a longer project. With Harbingers of Pestilence, Dethrone the Sovereign (consisting of Jake Vancil, Nick Mason, Jake Laskowski, Allen Barkley, and Derrik Schroeder) have put together a lengthier, more cohesive project that will ultimately help their careers blossom in satisfying fashion.

The opening tracks, “Era of Deception pt. I” and “Era of Deception pt. II” both feature complex guitar work that is likely softer than what familiar listeners would expect based on the band’s previous work. The quieter guitar plucking feels similar to the likes of Dream Theater or the more stripped back material from Opeth. While the latter track is entirely instrumental, “Era of Deception pt. I” simply begins with these whispering guitars before Dethrone the Sovereign jump into their more belligerent style of metal around the 1:15 mark. What’s nice about this shift in styles is that even though the vocals bring a definite level of harshness to the track, the instrumentals remain cleanly produced, creating a fine-tuned piece of prog metal. This trend continues on the track “Weavers of Allusion.” The vocals here are arguably the grittiest on the entire album, feeling closer to grindcore or deathgrind. When combined with the progressive instrumentals, Dethrone the Sovereign create a sound that is quite different from other bands in the genre. The gurgling, gross vocal performances on the track “The Vitruvian Augmentation” are also unlike what most will hear in a typical progressive metal project. It’s much grimier than what one would find from a well known prog metal act like Between the Buried and Me, though it still carries the technical prowess found from bands of that nature. The track “Torch of Prometheus” even carries a touch of harcore influence when the harsh vocals play over Derrik Schroeder’s fast and hostile percussion.

The aforementioned “Torch of Prometheus” and the title track possess elements of symphonic metal due to their incorporation of string sections. The backing strings give the tracks a sweeping sensation, allowing the instrumentals to soar and take over the soundscape. These elements work handily with the prog metal structures of each song to help create fully fleshed out tracks that take advantage of their layered organization. This is perfectly executed in the closing track “Perennial” which begins with soft strings and piano before erupting with its death metal characteristics such as the pounding guitars and once again raucous vocals. It’s quite impressive how many different facets of metal Dethrone the Sovereign include in their record. However, this might actually fault the album to a degree.

While Harbingers of Pestilence certainly provides a wide array of influences, one could argue that there is too much going on throughout the entire project. The differences between a strident song like “Weavers of Allusion” and a lighter moment like “Apostasy” are quite stark to the point where it can be jarring. These tonal shifts ultimately make the project feel scattered due to a lack of cohesion in style. The wide range of genres packed into the project is certainly admirable, though the album as a whole feels somewhat disorganized. On their own, the tracks work in good fashion but when lined up one after the other they can feel slightly unnatural given the drastic differences in structure.

While Harbingers of Pestilence is a bit jumbled, it’s an album that will likely catch the attention of many different varieties of metal fans. Whether you like complex prog metal, theatrical symphonic metal, or gritty death metal, Harbingers of Pestilence offers it all. Provided that Dethrone the Sovereign can hone their talents and put together more structured future projects, then they should have bright careers.

Harbingers of Pestilence is set to release on July 28th. You can follow Dethrone the Sovereign on Facebook and Bandcamp.

Cain Miller is an aspiring writer who hopes to work his way up and gain notoriety for his material. Having written about film, television, music, and sports, Cain is always looking to gain as much experience as he can and continue to improve his writing abilities.
@cainemiller
Previous The Persian Leaps Announce EP Bicycle Face
Next August Burns Red releases “Invisible Enemy” video & announces new album ‘Phantom Anthem’