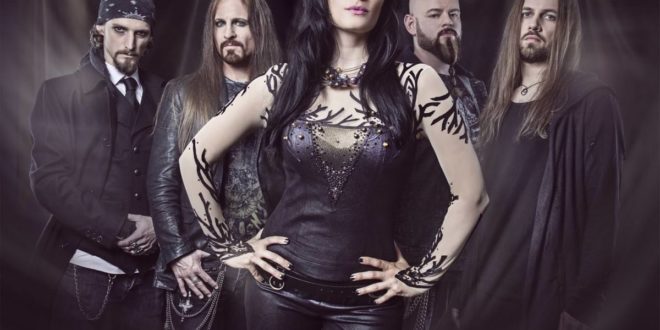 Napalm Records recording artists Xandria are set to return to the road this fall in North America alongside label-mates Kobra and the Lotus.  Also coming along for the ride is September Mourning.  The tour is set to kick off September 29th in Buffalo, NY and will run through October 21stin Atlanta, GA.  A complete list of dates can be found below. But not enough of good news!

Just in time for the upcoming Xandria tour, the band unveiled a brand new lyric video for the track “Queen Of Hearts Reborn” off of their latest effort Theater of Dimensions!

Xandria are touring in support of their latest release and seventh studio album Theater of Dimensions.  The album is a hyper-emotional affair that digs deep, lyrically speaking. It’s also an incredibly metallic effort.  There is a soundtrack-like, orchestral finesse inherent to the compositions, echoed by pounding groove and sophisticated shredding.

Steven Wussow, bass guitar in Xandria on the upcoming tour:
“What would be more fitting after the great success of our 1st North American Headlining run in may than doing a 2nd stretch in October? Right…nothing! Well, except doing another one with our buddies from Kobra and the Lotus! Hell Yeah!! So many cities we haven’t rocked so far! Well here we go again! Get your tickets NOW! Because THIS Is going to be AWESOME!”

Kobra and the Lotus are on the road in support of their Napalm Records debut Prevail I.  Prevail I is a rock juggernaut full of blistering guitars, pounding rhythms and haunting vocal melodies that take the listener on a sonic journey leading them out from the darkness and into the light! Stay tuned for more information on the follow-up album Prevail II next year!