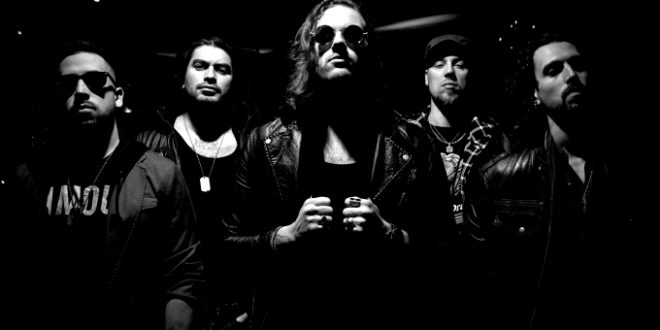 Last Bullet is a Toronto based band that knows how to make southern rock magic. The self-made band has spent the last 8 years building something they’re proud of, and they have every reason to be. Previous works include 2012 release Love.Lust.Illusion EP and their self-titled album in 2010. Having shared the stage with names like Aerosmith, Soundgarden, Slash, Buckcherry and more, this band is on the rise. Last Bullet’s EP 80-69-64 was released July 14th and proves that rock and roll isn’t dead with their energetic, confrontational tracks.

The opening track “Sin” is a powerful ‘in-your-face’ head banging classic with poetic lyrics. Grungy guitars are plucked away while Fontez’ voice flows like honey but with a hint of rasp. The melodic tune greatly showcases Fontez’ vocal abilities “If you ain’t gonna live /Then I don’t want to give.” The chorus is pounding while the verses are more slow and slithering. This track has a Saliva or Theory of a Deadman feel.  “So you crawl and you beg and you bleed / And you don’t look very tall on your knees. you’re a hound, take a bow to the greed. you live and you die.” The build up in this track is so great, you’d think this was the encore (we’re just getting started.)

“Gimme Time” is an aggressive track with a message of all actions having consequences. The hollowed out sound with excessive distortion gives the track a haunting feeling, like they’re sneaking up on an enemy, waiting to attack. Later in the song, it sets in this actually has a funk influence with an explosion of rock goodness. “I don’t know what you’ve done / but poppa’s in the corner loading his gun / Saying gimme time.” The cymbal taps keep it light enough that it isn’t too overbearing, and the unified “Whoa”s in the bridge are nice against the guitar cries.

The raw vocals and sweet like honey guitar sent me into a hypnosis in “Bright Lights.” This is a grungy track full of angst. “The people you meet / the faces you see / blur into a rage.” The bass in this track is great and had me tapping my foot. I imagine influences of Theory of a Deadman and Aerosmith.

“Southern Lips” is one that will either make you blush or want to take a cold shower. It is honest and honestly dirty. “Got that hourglass shape and legs for days / Girl, you got my head spinnin’ in a southern haze.” The song reminds me of a classic rock song that I can’t put my finger on (if any of you can think of it, let me know!) These guys know how to charm someone with the softer guitar tones blended with the grunge. The drums and bass stay steady of this southern rock track.

The air is thick in “Smoke and Ashes” as the song begins with a heavy bass and the grinding of a guitar sing. I can imagine smoke actually filling my lungs with this song, as if some terrible destruction had just occurred. The track could be considered the ballad of the EP, while still keeping its heavy components. “Smoke and ashes gonna leave you dry / …Violence is gonna take your life.”

Isolated vocals begin “Little Miss Filthy,” screaming “How many guys has those hypocrite’s lips kissed / How many lies has it told with those eyes.” This is a catchy track about a slithering whore who knows how to charm, but apparently with everyone else, too. Despite the charm, you see all the good about said person and is sometimes just too hard to quit. “Takes you for the ride of your life / She’s got gypsy magic, whimsically tragic / When the pain begins to twist like a knife.” The drums are more noticeable in this track with a nice touch of a tambourine in the background.

If you’re a fan of classic or southern rock, give this edgy EP a chance.