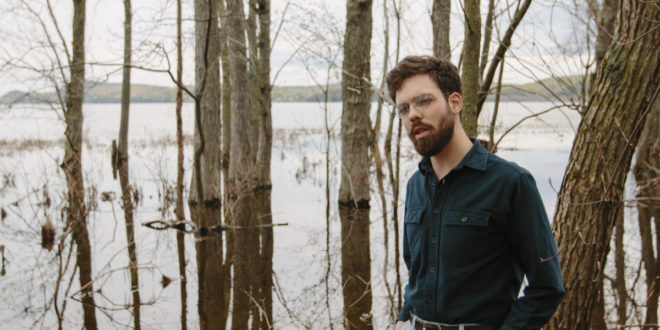 Vermont based musician Henry Jamison debut album The Wilds will be released October 27th but he this is not his first foray into the current musical landscape. His previously released songs have accumulated over 20 million streams on Spotify and he has played at Grace Potter’s Grant Point North. I recently interviewed Jamison and we discussed everything from coming from a writing family, the intimacy of his music, and the music video for his song “Real Peach.”

Well, as much as Vermont has the well-deserved reputation as being this quiet, green place, I live in the North End of Burlington and am currently hearing a construction crew, someone blasting heavy metal from a car and a kid crying across the street. So the studio has been a nice, separate place in which to reflect and record the music that I write in more hectic locations. In terms of the wilderness, I think that the silence of it is especially inspiring. I like the metaphor of the heliotrope: the plant that turns toward the sun. I like to feel like that, yearning quietly and growing up out of my lesser selves.

No pressure, no. I mean, I felt a certain pressure in terms of academics, but was also resistant in a way that I might generously term a “counter-education,” i.e. I skipped class because of some unconscious resistance to the institution. And that resistance wasn’t encouraged by my family, though my creative efforts have been. I see them as connected, but I’m not sure I can say how right now.

Oh, that was just an example of a cassette tape culture that my dad kept going through my childhood. He’d come home with a tape once in a while. One of them was “Hey Jude” and it was just a very stimulating thing. I remember smelling the tape before I put it on; it was all very tactile, because I was maybe 7-years-old. And I liked the song “Hey Jude” but it wasn’t my favorite. I was more into “Hey Bulldog” and “Good Morning Good Morning”.

Something has been lost, for sure. The tactile aspect that I just mentioned. But I listen to Spotify while I cook and it just spools off tons of songs that I wouldn’t have known otherwise. I discovered the Irish singer Paul Brady that way and he’s my favorite right now. Plus, an understanding of the importance of the object and the artwork has come right along with streaming.

I’m printing this record on vinyl and I’m very happy about that, but I don’t especially care how people listen. As far as issues of preference are concerned, this one seems blessedly uncontroversial to me.

For the most part, the record is about that “seeing-through” as it relates to relationships in particular. Most of the songs are about seeing myself through another person’s eyes and trying to relate. I was doing that before, but it became clarified recently. Listening to the record, it actually seems like an obsession, but that has partly to do with what songs seemed to live together best as a batch and there are others I’ve written that are more symbolic and enigmatic, so that’s one place I’ll go back and explore. I’ve matured a lot as a person, but my music actually is moving more cyclically, like I’m coming back to ways of writing that I haven’t looked at in years and kind of forgot about.

I do make some effort to keep things conversational, most of the time. There are moments of “talk-singing” that happen naturally, almost more out of not knowing how else to get an idea across except by just saying it. I read a lot of prose. Even with the poets I read, I tend to read more about them than I read their actual poetry. That’s actually something I’d like to change. But yeah, these songs are vignettes, mostly biographical, so the chapter comparison is totally fair, though of course there’s still a lot of rhyming.

My high school friend called it “swoony” and that’s still going on. It’s just my way of writing and singing and playing guitar. This record is especially that way and I’m interested in trying other things, but the core intimacy will likely always be there.

My manager and I thought it up. We went to Dick’s sporting goods and bought a bunch of equipment and then I just ran around a Little League field, fielding nectarines and hitting them. It was on a day off in LA and we basically had eight hours or so to get something. The idea was very funny to us and still is. But it’s also a fine playing-out of the song. The song could’ve had one of those very wide-eyed lens-flare boy-girl videos, so maybe there was some resistance to that genre-specific thing.

A Sugar Ray single was the first CD I bought and the latest was…Anna and Elizabeth’s record that they’re making now, through their PledgeMusic campaign.