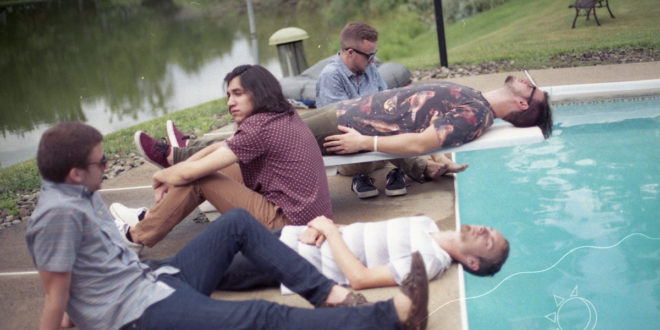 Check out the video here:

Off the band’s upcoming EP, due out in the fall, lead single “Stay Dry” draws from the destructive cycles of depression and negativity. The intense story contrasts sharply against the bouncy, almost bubbly backdrop of the song’s arrangement. Tambourine and acoustic guitar launch the song into a catchy introduction, weaving easily into the electric guitar and thumping beat that follow. Despite the vibrant sound, angsty repetitions of “you don’t know where you are, oh but you wanna go home,” reveal the song’s darker themes.

Guitarist Stephen Grzenda describes “Stay Dry” as ironic; while inspired by how “[a] recurring cycle of late nights and bad decisions leads to loss of control and a troubled mind”, the song itself is “wrapped in a blanket of happy chords and ignorance.”

The video accompanying “Stay Dry” incorporates the song’s musical contradictions, depicting lead singer’s Shane Turner’s discomfort at a house party. Jump cuts between the raucous party and an overwhelmed Turner put on display the song’s internal struggle, culminating in an impassioned outburst as he knocks photographs from the walls. Unsteady camera angles and frequent transitions from blurred to focused shots mimic first person perspective to produce the video’s intimate atmosphere. With “Stay Dry”, Hear Tonight have offered up a compelling artistic perspective to the indie alt-rock scene.

I write about music and live shows and other fun things. Strong feelings about pugs, Halloween, and burritos. Currently zooming around northern California, with frequent stops in LA.
@missdanajacobs
Previous Interview with Vincent Price of BODY COUNT at Chicago Open Air 2017
Next Acito Borrowed Time (Produced By @AcitoTheGreat)