Home / News / Show review: G-Dragon at The Forum in Inglewood, CA on June 16 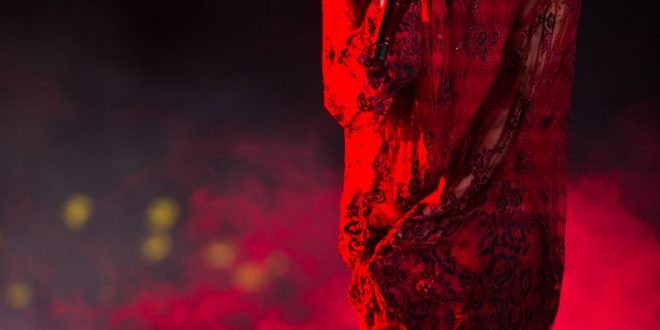 Show review: G-Dragon at The Forum in Inglewood, CA on June 16

Toward the end of this high-profile Los Angeles stop on his Act III, Motte in the USA Tour, G-Dragon took measured steps to distinguish the real man, Kwon Ji-young, from the famous stage-named rapper/singer. A South Korean performer, who first gained fame as a member of Big Bang, showed one clip where everyone — from his parents to fellow star Psy — talked up the music star. The second clip, which found the performer awkwardly speaking about his struggles with an identity crisis, was just too close to a Barbara Walters/reality show moment for comfort. And while these videos may have provided the audience with an intimate window into this flesh and blood human, they were also severe concert momentum killers.

G-Dragon was far more effective whenever he let his music do all the talking. And although he filters American pop music through the lens of a uniquely South Korean culture, G-Dragon is a fairly legitimate rapper. He also has a flair for the dramatic, as one selection called “Obsession” found the diminutive singer climbing into a figurative coffin at song’s end.

Every now and again, an article appears in the music press predecting the impending commercial breakthrough of K-Pop, which is how G-Dragon’s music has been branded. And just as Luis Fonsi’s “Despacito” has recently transformed Latin pop into a commercial force to be reckoned with, all it takes is one hit pop hit to do the same magic for K-Pop. And it needs to be something more substantial than the novelty hit “Gangnam Style.” Therefore, it is only natural to speculate if G-Dragon may be that K-Pop artist to break the genre wide open into the mainstream.

On the plus side, G-Dragon is an energetic, charismatic performer. And yet, it felt odd to sit amongst such a polite mostly-Korean American audience. Few attendees got up out of their seats and danced to G-Dragon’s EDM-inspired dance/rap tracks, preferring instead to wave yellow flower flashlights to the beats. It will take more enthusiastic excitement to convince Americans G-Dragon is worth their attention.

There were a few other oddities in G-Dragon’s concert. For instance, his live band was divided into two parts, with parts flanking each side of the stage. It was unusual to see his backing band separated by a long, rectangular stage. How on earth did these players even communicate with each other across this great distance? Secondly, G-Dragon sang his first few songs from inside a box-y set toward the back of the stage, while his dancers moved and grooved in front of him. One had to wonder if this physical arrangement was somehow symbolic, in that the songs that followed found him ‘getting out of his box,’ so to speak.

While G-Dragon is perfectly comfortable rapping, his thin voice leaves him a relatively weak natural vocalist. He simply doesn’t have the kind of singing voice one would marvel at. Instead, he sings much the same way one might expect an underdeveloped boy band member to vocalize.

Although G-Dragon continues to mature as a performer, the jury is still out on whether or not he’s destined for an American commercial breakthrough. If he wants to court American music consumers, though, he’d be much better off just letting his songs tell his story. And had he done a better job of pacing his set at The Forum, he certainly would have secured more progress toward full American acceptance.