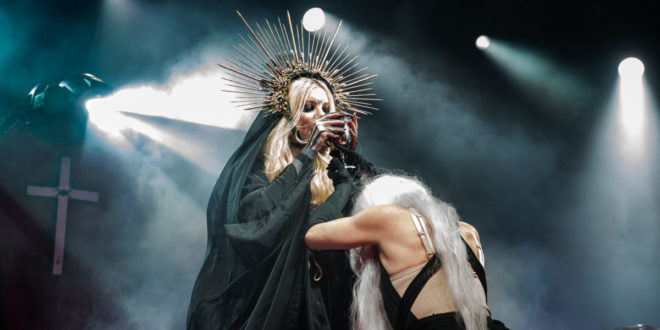 In This Moment will remain incredibly busy upon releasing their new album Ritual, out July 21. The band is currently in the middle of a headline tour in support of the album and will stay on the road through the rest of 2017.

In This Moment are pleased to announce that they will continue their wildly successfully “Half God, Half Devil” headline tour this fall, which will also see them making appearances at major fall festivals. Joining In This Moment on this leg will be Of Mice & Men, who will serve as direct support. Avatar will open the shows.

The anticipation for Ritual continues to burn at a fevered pitch, with fans packing each show on the current tour. First single “Oh Lord” has been met with praise. It steadily climbed the radio charts and has just cracked the Top 10; watch the video here. The band also shared the new track “Roots” leading into release; listen to the song here.

In This Moment also dropped their sonically arresting and dramatic reimagining of Phil Collins’ beloved ’80s classic “In the Air Tonight,” which lives on Ritual and has been incorporated into the band’s live set. In This Moment have truly made the song their own, thanks to a captivating rendition that both preserves and updates all the tension and release of the original. Listen here.

Ritual will be released by Atlantic Records in partnership with Roadrunner Records and is available for pre-order now. Exclusive pre-order bundles, which include custom In This Moment branded rosary beads, are available now at the band’s webstore.