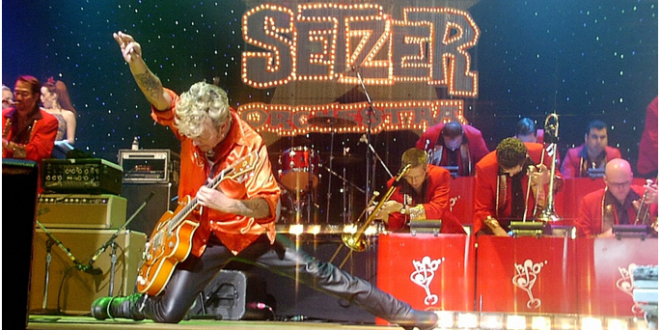 Iconic guitarist, songwriter, vocalist and three-time Grammy-Award winner BRIAN SETZER and his 19-piece THE BRIAN SETZER ORCHESTRA have announced their 14th annual “Christmas Rocks! Tour,” presented for the second consecutive year by SiriusXM. Hitting 30 cities, the holiday extravaganza will launch November 10 at the State Theatre in SETZER‘s adopted hometown of Minneapolis and wrap up December 28 (full itinerary below). The public on sale is Friday, July 21 at 10am local time, with the following presales:

2017 is a big year for THE BRIAN SETZER ORCHESTRA who will celebrate their 25th anniversary in style with an exclusive landmark show at the Hollywood Bowl in Los Angeles on August 2. Under the stars at the legendary venue where they’ve performed on four previous occasions, SETZER’s trademark guitar work and vocal stylings will be matched with his 19-piece orchestra‘s rockin’ big-band horn arrangements, making for a reliably unbeatable combination.

BRIAN SETZER belongs to an elite group of artists who’ve had four super successful phases of his career, from the Stray Cats, to solo albums, The Rockabilly Riot to BSO. The BSO show seamlessly encompasses music from all these phases. “The music I play in the big band is rock n’ roll with a jazz influence,” says SETZER. “What keeps it fresh is the quality of the players in the band. Also a big part of keeping the big band fresh is the arrangements; writing the arrangement for 18-19 people is like writing a song within a song.  It makes the song you might have heard many times sound new again.”

For the past two years, THE BRIAN SETZER ORCHESTRA has had a strong presence on SiriusXM during the holidays. The band performed exclusive invitation-only concerts for SiriusXM listeners in New York City in 2015 and 2016, which aired on SiriusXM‘s Outlaw Country and Holly channels. Details of this year’s special SiriusXM concert will be announced this fall.

* = on sale at a later date (TBA)
More dates to be announced soon!

Visit www.briansetzer.com for more information and to purchase tickets.

Previous New Music from Nadia – “I Left My Heart in California”
Next Vanna Announce Final Show… EVER!