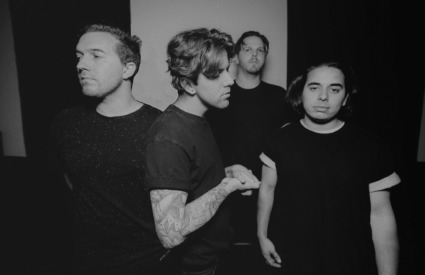 San Fernando Valley’s electro-pop quartet Sleeptalk return this July with self titled-debut album of the same name; following on from 2015’s Pure and Young EP’s, which gained publicity from the likes of Alternative Press and Paste Magazine, Music Existence jumped at the chance to take an exclusive listen at what’s to come for the California four-piece.

Set for release via Artery Recordings on July 28th, title track “Sleeptalk” builds into the rest of the album with vocals hidden beneath standout, muffled sounds and a fast cut-off that brings attention to a fuller piece: “Indio, California” takes a heavier, more energetic approach, with somewhat DIY, off-beat vocals by Anthony Fitzpatrick, reminiscent of Cute Is What We Aim For‘s gritty undertone.

Echoed vocals break into a memorable chorus, in-your-face nostalgia that tells Fitzpatrick’s story; “There comes a time in everyone’s life where they feel like they need to grow up and begin looking into future endeavors and future relationships.”

“Midnight/3,2,1” carries a beat at the heart of the track that seems to be what Sleeptalk built upon. A drunken showcasing of scattered electronics carries a sad, yet blissful tone that feels almost interrupted by pre-released single, “Young”. Taken from the titles of former EPs alongside “Pure”, “Young” caters to the preteen in you alongside song five, “Bright Eyes”. Packed into 3 minute clips, it is clear that the pair were written with the intention of being performed on stage beside the likes of our angst-filled favourites, The Early November or AM Taxi.

“Bones” takes a new, more intimate tone in the centre of the record. Alluring vocals followed by a firm beat in the heart of the song carries on into harmonies that fade until the end, following on to early June’s release of video accompaniment for “Strange Nights”.
It pained just the picture that we expected; While still including shots of the bands performance, this is not the bulk of the video, which focuses on the same female front-woman that appears in “Indio, California” and shares a pale colour palette that relates directly to the track itself, though the scenery follows this album to create an atmosphere directly related to what the band themselves bring to life.