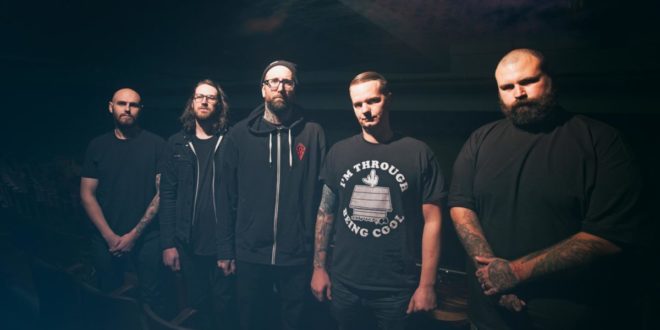 Massachusetts metal band The Acacia Strain have returned with their eighth studio LP Gravebloom, another notch in the band’s discography that showcases their diverse sound. While The Acacia Strain have previously been given the deathcore label, the band themselves have strongly denied being tied to this style, seeing as how the deathcore genre is largely frowned upon in similar fashion as the likes of djent or nu-metal. It’s easy to see why The Acacia Strain separate themselves from the deathcore genre because their sound definitely brings much more to the table than just death metal and metalcore. With clear influences ranging from doom metal, harcore punk, and even some black metal mixed in, Gravebloom provides a more layered assortment of tracks than what one would find in more straightforward deathcore and it’s a sound that will surely garner attention from many different varieties of metal fans.

The opening track, “Worthless,” begins with an almost industrial number which then transitions into a slow, trudging sounds that feels close to doom metal and sludge metal. The plodding pace and bass-heavy sound is comparable to the likes of Crowbar and The Melvins. With this track, it’s easy to understand why The Acacia Strain don’t simply fall into the categories of metalcore/deathcore. Their sound isn’t overly fast or stylish, it’s gripping and chunky. It makes its way at a creeping tempo and builds a dark atmosphere. This style is especially prominent on the track “Abyssal Depths.” This track starts off with a quiet, ghostly guitar that draws comparisons to the slower moments on Metallica’s Ride the Lightning. The track builds up and explodes into its heavier vocals and instrumentals all at once, creating an authoritative presence. The slow and sinister tone of the track feels quite similar to Behemoth. “Abyssal Depths” feels closer to black metal more than anything due to its effortless shifts from an abrasive sound to the quieter moments found in the intro and outro. This trend is also found on the closing track, “Cold Gloom.” The bass-heavy sound is once again present here but the band is given of wealth of time to develop a more textured song structure given that the track clocks in at over nine minutes. This track is closer to black metal not just in its haunting instrumentals and chilling guitar work, but also in its seemingly personal lyrics and overall emotional sound. The sadder tones to Vincent Bennett’s vocals feel slightly similar to Panopticon’s Austin Lunn due to his ability to create a harrowing yet beautiful tone to the music.

Other moments on the LP definitely take a much more aggressive approach. With its smashing drums and cutting guitar licks, the track “Plague Doctor” feels similar to the work of Lamb of God. The tracks “Big Sleep” and “Gravebloom” feature some unrestrained vocal performances which draw comparison to Jacob Bannon of Converge. These vocals, when paired with a solid solo in the latter track give these songs a more classic metalcore vibe. The band’s hardcore elements shine through on tracks like “Model Citizen,” “Calloused Mouth,” and “Dark Harvest.” The rapid percussion and fast guitars combined with the band’s apocalyptic lyrics all feel similar to Cattle Decapitation. On top of this, there definitely seems to be some Ringworm inspiration behind the band’s combination of hardcore punk instrumentals with metal vocals. All of these elements work together to create a hard-hitting exploration of different facets of heavy music.

The variety throughout this LP is certainly appreciated. There is enough material to quench fans’ thirsts and the sheer amount of metal genres combined in every song keeps the project from running stale. My only notable complaint comes from the lyrics. While the apocalyptic lyrical themes give the project a strong feeling of desolation, at times they seem to be trying too hard. The chorus of “Worthless” for example, which states “Sing me to sleep, scare me to death,” feels a bit heavy handed in its punishing tone. Lyrics like these which pop up throughout the album tend to lack subtly, feel quite forced, and almost come across as cheesy. That being said, while the lyrics are rather blunt they never managed to take me out of the music. The performances and compositions are all strong enough to compensate for the lyrical downfalls.

Gravebloom is another solid addition to The Acacia Strain’s extensive discography. The Acacia Strain do a fantastic job of combining their hardcore and metal roots to create a project that will please fans and likely earn recognition from new listeners who enjoy a large number of heavier genres.

Cain Miller is an aspiring writer who hopes to work his way up and gain notoriety for his material. Having written about film, television, music, and sports, Cain is always looking to gain as much experience as he can and continue to improve his writing abilities.
@cainemiller
Previous Loudwire Music Awards: First-Ever Ceremony & Concert Set For Oct. 24 At Novo Theater In DTLA; Tony Iommi Of Black Sabbath To Receive ‘Courage Award’
Next Gallery: Black Map at Irving Plaza in New York City 07.11.17