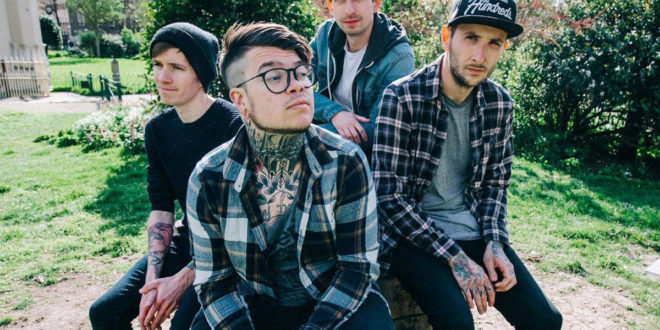 In the spirit of sadness and sassiness, pop-rock outfit The Gospel Youth are gearing up to release their debut album Always Lose on July 14th via Rise Records and Velocity Records. This 10-track offering is full of upbeat melodies and angsty lyrics.

Hailing from England’s South Coast, The Gospel Youth is made up of Sam Little (vocalist), Julian Bowen (guitarist), Kev Deverick (guitarist), and Kurtis Maiden (drummer). They released their EP, Empire in July of 2015 and dropped 12 crowdfunded singles over the course of 2016. Since forming in November of 2014, the band has faced a few lineup changes, most recently parting ways with bassist Tom Aylott this past February. However, these hurdles haven’t slowed The Gospel Youth down. Their success has seen them share the stage with names like We Are the Ocean, Deaf Havana, and Hands Like Houses. The band is currently winding its way around the US on the Vans Warped Tour.

“I Will Deliver You To The Fireflies” is an interesting way to open an album, and it definitely grabbed my attention. An uplifting, soaring piano stands in opposition to lyrics like “You were weak from the nights that you spent fighting your way out of hospital beds.” The Gospel Youth gives me some strong Simple Plan vibes during the chorus as Little howls with reckless abandon.

“Gin & Black Coffee” follows with the album opener I had expected. Calling back memories of early 00’s pop-punk tracks (that I still blare with pride), this song is full of energetic, kick-down-the-door riffs and beats. Little’s vocals are best described as Patrick Stump meets Brendan Urie as he wails with staggering control.

Taking things back to simple basics is “Wildfire” with the acoustic start in this number. As if to mimic the line “In this soul there is a fire this body can’t contain,” the melodies all come together and explode during the chorus. This is the kind of track that stands as a reminder that, no matter what life deals out, you are “meant for something more.”

One of Always Lose’s highlights is the sassy “Your Love Was A Cancer,” where Maiden’s complex drum licks stand out. Little’s witty lyrics about never wanting to see someone again are a refreshing break from the maudlin songs on this album.

Sometimes it seems like absolutely nothing is going right, a feeling that The Gospel Youth captures perfectly in the album’s leading single. Just like the title suggests, “Moods Like English Weather” features fast-paced melodies with a melancholy bend, giving me a sense of barreling though dark emotions.

First appearing back with The Gospel Youth’s formation, it’s safe to say that “Kids” is the song that made the band. “Jules [Bowen] and I wanted to work together and when he showed me the song ‘Kids’, I instantly loved it,” says Little about the track. Indeed, the vocalist holds nothing back in this number, crooning lines like “‘If you’re gonna sing, sing it with soul,’ she said.” This pop-rock anthem features playful guitars and an infectious chorus that had me singing along during my second listen.

Wrapping up Always Lose on a deeply somber note is “Bloodlines Love Stopped Me Coming Home.” While the title is something of a mouthful, the turbulent song is easily relatable for many. Maiden’s driving rhythms fuel the wild guitars as Little passionately sings his anxieties with the line “I know if I don’t come back soon, then that last goodbye will last forever.”

This is the type of album that may hit a little too close to home for some. The Gospel Youth is clearly not shy about wearing emotions like badges of honor, and their translations of depressions and anxieties into music is nothing short of perfection. Always Lose is honest, it’s deep, it’s raw, and it’s definitely one to check out. You can pre-order the album on iTunes, GooglePlay, Amazon, or MerchNow. Be sure to give The Gospel Youth some Spotify love too, and catch their set on Vans Warped Tour.