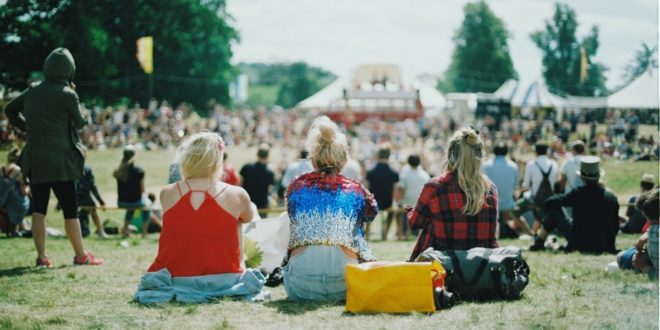 You’re in luck because 2017 is chalk-full of epic summer music festivals. I use the word “summer” loosely. While we only get three official months of summer, the hot weather doesn’t disappear when September 22nd rolls around and, thankfully, neither do the festivals, which stretch all the way to October.

Below are the details on the biggest fests across the country.
Lollapalooza (August 3–6, Chicago, IL)
Of all the reasons to go to Chicago, Lollapalooza might be the best one. This long-running music festival is always off the chain, but this year you can dance to the smooth rhythms of Chance the Rapper and Wiz Khalifa or just hang out on your blanket soaking in the sounds of Lorde or The xx. Whatever your tuneage preferences, this festival is like deep-dish pizza: there is so much to bite into.
Burning Man 2017 (August 27—September 4, Black Rock Desert, NV)
Burning Man is literally everything. That is the answer you get if you dare ask someone to explain what this pilgrimage to the desert is like. Despite the reputation that it’s turned into an over-commercialized hang out for Silicon Valley yuppies to do drugs and have their moments of spiritual awakening, The Burn is still a great time if you can handle the hot, hot heat of The Playa, and something that resembles Mad Max on planet Tatooine.
I wish I could tell you who is playing at Burning Man, but that is next to impossible as everything is very secret, spontaneous and surreal. Like whoa …
Afropunk Festival [(August 26-27, Brooklyn, NY)
In 2005, the first annual AFROPUNK Festival debuted at the iconic Brooklyn Academy of Music and was a celebration of music, film, skate, and art which targeted a more multi-cultural audience. Fast forward to 2017 and it is safe to say that the Afropunk movement is still going strong as we now have AP festivals in London, Paris, Atlanta, and Johannesburg.
Each city will have its own set of artists, and they’ll all bring something special to the microphone. The Brooklyn festival, which features Macy Gray, NAO, Danny Brown, Anderson .Paak, Dizzee Rascal to name a few, will be bringing the people out in droves to celebrate diversity in music and culture.
Electric Zoo(September 1-3, Manhattan, NY)
Electric Zoo has become one of New York’s largest music festivals since its 2009 inception, always featuring top names from the world of electronic music.
This year’s theme is “The 6th Boro” and Randall’s Island will briefly become a “utopian dance-tropolis.”  You can’t have a weekend of massages, glitter and “dancing” without the tunes and this year’s lineup features some of the biggest beat-makers with the likes of DJ Snake, Deadmau5, and Armin Van Buuren.
Made in America (September 2-3, Philadelphia, PA)
Philadelphia’s Made in America lineup is pure red, white and blue with JAY-Z, J. Cole, The Chainsmokers, Kaskade, Marshmellow, Migos and more.
Day N Night Festival (September 8- 10, Anaheim, CA)
Day N Night is an annual music festival in Orange County, California. This fest takes place in Angel Stadium. Of course, Chance the Rapper will be there, joined by Kendrick Lamar and Travis Scott who round out the headlining acts. The stacked lineup for the three-day event also includes Kid Cudi, YG, Lil Uzi Vert, Khalid, 21 Savage, Post Malone, SZA, and more.
Life is Beautiful (September 22 to 24, Las Vegas, NV)
Life is Beautiful is more than just music, it is a festival of art and ideas. One day you’re listening to the hard rock sounds of MUSE, the next day you’re getting scientific truth-bombs from Bill Nye.
There is so much artistic spontaneity that it’s quite conceivable that we could see some major artist performing with Cirque du Soleil and it will blow our minds. This three-day, multisensory experience is all taking place in the heart of Las Vegas.
There is a lot going on with this fest, but ultimately, you’ll be busy jamming to an amazing lineup of musical talent like Chance the Rapper, Gorillaz, Blink 182, and much more.
Austin City Limits (October 6-8 and 13-15, Austin, TX)
It’s a well-known fact that everything is bigger in Texas and that includes the music festivals. This party is so massive it needs to span two weekends.
Chance the Rapper continues the festival circuit and will be there with JAY-Z. When you add the likes of the Red-Hot Chili Peppers and The Killers, you have yourself a good ol’ fashion hoedown. There is a reason they call Austin the live music capital of the world.
Attachments area

Stephen Vicino is the founder of MusicExistence.com. He created this site to give talented musicians a voice and a way to be discovered.
@@svicino
Previous Gallery: Gary Clark Jr at Brooklyn Bowl in Las Vegas, NV 06/20/17
Next Gallery: Otherwise at Scars and Stripes Festival in Las Vegas, NV 06/03/17