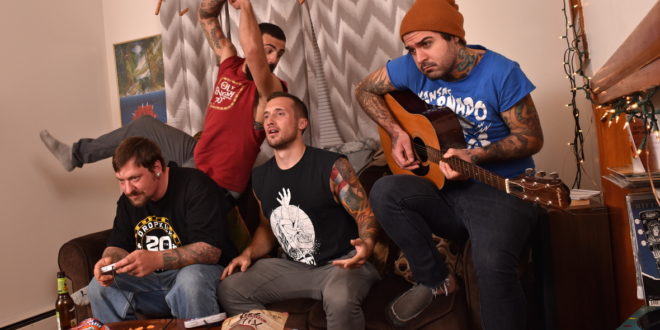 Gritty NY-based skatepunk band Ate Bit released their debut album No Space Like Home last November and today you can watch the music video for the single “Back to the Loser”. Produced by John Naclerio (Brand New, My Chemical Romance, Real Friends), the fast and brash song is a throwback to bands like Millencolin and would easily fit on a Tony Hawk Pro Skater soundtrack.

“This song is about going back in time and telling yourself that your future sucks when you get older, but you’re so thick headed that you don’t listen and just go down the wrong path anyway,” says drummer Ryan Rostad.

In the video, the band gets into a fight and break up to go their separate ways. Most of the members end up with terrible jobs and alcoholism, but bassist Charlie Montleon finds success as a male model. The video was shot in NY by Dillon Eckes of DX Films.

Get No Space Like Home on Bandcamp and iTunes.