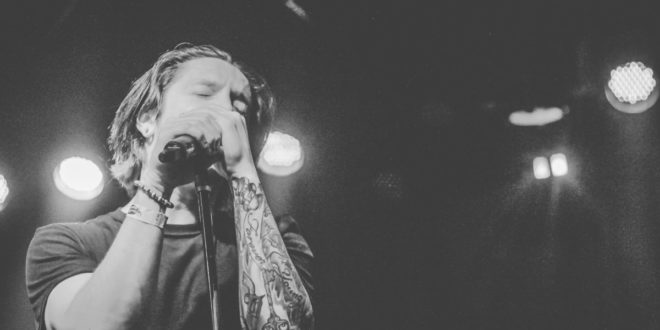 Gallery and Show Review: The Word Alive at Outland Ballroom in Springfield, MO 6.30.17

Arizona natives The Word Alive treated Springfield, MO to the start of a holiday weekend with their summer tour at the Outland Ballroom. It was a breezy summer day, and the vibes couldn’t have been better. I caught a glimpse of The Word Alive at last year’s Houston Open Air, so I was excited to see these guys again. Their 2016 release Dark Matter is a reflection of the band’s new direction compared to their previous albums. Despite their newfound softer sound, they still possess the hardcore elements from their earlier years.

Four local openers pumped up the crowd before The Word Alive rocked everyone’s faces off. The Veer Option held an active crowd with their half hour set of metalcore. Silence In The Library surprised the audience by jumping into the mosh pit. Their set was filled with passion. Third on the bill was Starving The South: a funky, saucier version of Memphis May Fire. They were quite the entertainers and fun to watch. Phinehas delivered a solid set, and their pit covered the ballroom floor. This is a band with an incredible stage presence that has so much potential.

Smoke filled the room as The Word Alive took the stage. Tony Pizzuti (guitarist), Zack Hensen (guitarist), Telle Smith (vocals), Daniel Shapiro (bassist), and newly added Matt Horn (drummer) delivered their performance with high energy. Pizzuti and Shapiro spun across the stage for “Entirety.” Smith said, “If there’s one thing I want to see tonight, it’s those horns in the air.” The crowd granted his wish and more with the utmost participation: moshing, jumping, and screaming the words back to the band’s faces.

Horn slayed out sick beats as Pizzuti brought out the melody for “Life Cycles.” The audience danced in the shadows of the blue, green, and red light arrangement while clapping along. The build up during the bridge made the hairs on my arms stand up, and Smith showed a phenomenal vocal range throughout the night. Smith shared “Last time I was here, I had a broken back. I told you we would come back, and we did. Thank you so much for supporting us.” They proceeded with Smith’s favorite track “Made This Way,” filling the air with its hauntingly sweet, melodic intro. We swam through the sound waves while Smith poured out his heart for a track he’s so passionate about.

The Word Alive kept great fan interaction throughout the set, looking audience members dead in the eyes. They played a few recent tracks, such as “Misery” and “Overdose.” The Word Alive introduced their last track “Trapped” with “Thank you for singing and sweating. It’s always a pleasure… We’ll see you later this year.” Despite the promising return, the crowd chanted for an encore, left wanting more. The band graciously greeted and hung out with fans after the show.

The Word Alive just finished their summer tour across the U.S. According to recent social media posts, they are back in the studio for their next creation.