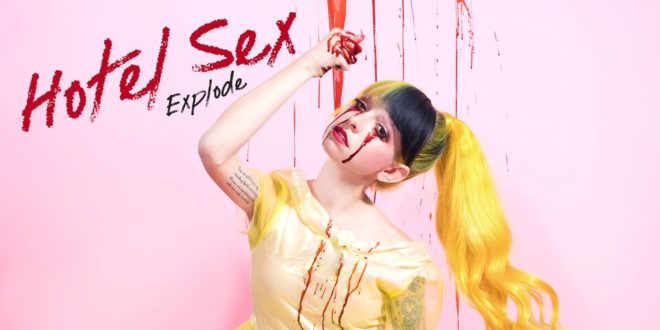 The newly formed electronic-pop act HOTEL SEX is causing a scene with the debut of their brand-new, unfiltered single, “Explode.” Today, the duo has partnered with NakidMagazine.com to premiere a provocative new video for the single, which boasts satanic rituals, milk facials, rabbits playing keytars and penis puppets!

“”Explode” is essentially a song about a bad guy, and a girl who, in the end, turns out to be even worse than he is.  I liked the idea of a seemingly “good” girl being a wicked boy’s downfall. I’ve always loved the dichotomy of innocence and evil – people tend to look at me and think, oh she’s cute and harmless, when beneath the big eyes and sweet smile is a bit of a devil. The video takes something innocent and childish – watching Saturday morning cartoons and eating cereal – and subverts it into something sexy, inappropriate, and totally strange. It’s like a creepy cute, slightly satanic, candy-coated sex dream. I’m a super sexual person, so I wanted to create something that embraces a girl (or anyone!) taking pleasure in their sexuality – I just wanted to do in the most colorful, crazy, true to myself way.  Basically the whole thing needed to be a little bit twisted and a little fucked up haha. Yay for pervy, keytar playing bunnies, dick puppet shows, milk showers, and rainbow penis pops!” – Augusta Wise

Mixing their influences of electronic pop, metal and dance music, HOTEL SEX is the new project of Los Angeles singer/visual artist Augusta Wise and songwriter/producer Linus Dotson. After years of working with a diverse roster of artists (everyone from Charlatans UK to Kool Keith), Dotson provided the musical foundation for Wise’s voice and lyrics, resulting in their debut single, “Explode.” The duo teamed up with veteran music video director Rich Ragsdale (Avicii, Andrew MacMahon) to film the video for the song, a twisted and sugar-coated journey into the id. Hotel Sex is currently busy writing new material to follow up their debut.

Previous BARB WIRE DOLLS Share Powerful Message of Self-Love in New Track “If I Fall”
Next Gallery: Ghost at The Warfield in San Francisco, CA on 07/02/2017