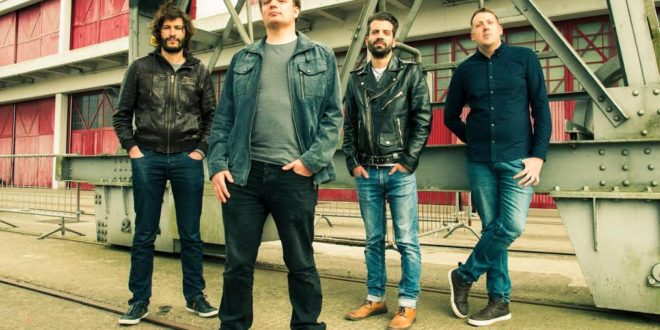 With the release of their EP Cosmos, Bristol band White Noise Radio continue to make waves in the metal community. With a distinct blend of alternative metal and prog rock, White Noise Radio have developed an innovative sound that will create a unique listening experience for all those that give it a chance. Recently, I asked the band some questions regarding their latest release. In this interview, White Noise Radio discuss how the group formed, what their plans are for the future, and what it was like to record at the legendary Sawmills Studio.

ME: Your debut EP Cosmos was just released on July 1st. What can you tell us about this project?

WNR: Cosmos is the follow-up to last year’s debut, and we’re really proud to say that it’s a genuine step up for us as a band. Though it’s still a short EP release, not a full album, we’ve taken a huge amount of care in writing each song to make sure they’re all the very best they can sound.

ME: It seems that the mascot for the EP is the mysterious astronaut who appears both on the album cover as well as in the music video for “Dawning.” Is she symbolic for something? What is the story behind using her as the face of this project?

WNR: Interestingly, we didn’t intend to use her as a central theme in the record, it just sort of emerged naturally from the character of the release. We decided early on that astronaut imagery would make a cool basis for the artwork, but as far as her becoming the “face of WNR” that didn’t really come about until we created the video for Dawning. The concept of the EP that eventually arose is that of individual realities; how one person’s experiences affects their worldview and how they interact with the world – in a way, we’re all adrift in our own personal cosmos.

ME: Speaking of “Dawn,” that music video is quite colorful and artistic. What was the inspiration behind the video’s style?

WNR: That was part of what our excellent cinematographer Rob Ellis brought to the table. We never explicitly asked him to incorporate parts of the EP artwork, but he took influence from the clouds of colour surrounding our astronaut, which helps draw the video even closer into the EP as a whole.

ME: What is your favorite song off of the EP?

WNR: You can’t ask that! That’s like asking a mother which child she prefers! Although, I have to say, “Gone Inside” is my favourite at the moment – it just rocks really, really hard, which I love. Don’t tell the others, though . . .

ME: You’ve said that some of your influences include Tool, Porcupine Tree, and Incubus, and I can definitely hear all of those inspirations in your music. I would describe your sound as alternative metal with prog rock elements. What drew you to this genre and made you pursue this style?

WNR: Hm. It was never a conscious decision on any of our parts, it’s really just a result of the bands we listen to. Beyond the main influences you mention there are a whole host of other artists that contribute little bits and pieces here and there – everything from Chvrches and Opeth to And So I Watch You From Afar. Anything that’s more than just “heavy” is good for us.

ME: On your Facebook page, you say that your band consists of “One Hungarian, One Frenchman, and Two Englishmen.” How did the four of you originally meet?

WNR: Gumtree! Ben and Antoine met up through Gumtree initially and started writing, and James later joined after answering an ad. Mark was recruited as a work colleague of Antoine’s, and we took it from there. Got to say, you get a lot of weird emails when you’re looking for band members on Gumtree, there are plenty of people who can barely even write their name.

ME: You also said that you initially won a recording session at Sawmills Studio which led to the release of your debut EP back in Spring of 2016. Can you give us more details about this process? How did you win the chance to record at Sawmills Studio?

WNR: Yeah, that was a crazy experience. We competed in the 2015 Underdog Battle of the Bands in Bristol, which was a summer-long event where 50 bands fought it out for a grand prize of £1,000. We didn’t win, but we scored the 2nd place prize of a day’s recording in Sawmills, and it was such an incredible place. For a band that’s used to working in the cheapest studios at a very tight budget, it was crazy to be ferried by boat up to this fantastic analogue palace.

ME: Was it a bit surreal recording in a studio that has aided the likes of Oasis, The Stone Roses, and Robert Plant, among many other noteworthy acts?

WNR: Yeah, surreal is certainly the right word. It felt almost like it wasn’t quite real, being in such an amazing place – almost more like a holiday than the start of a recording.

ME: The environment at Sawmills Studio is quite beautiful. The building itself is located right by a river and is surrounded by lush greenery. Do you feel that this one-of-a-kind setting benefited the recording of that EP?

WNR: For sure. It makes such a huge difference to your mindset when you’re taken away from the daily routine, and though we were only there to track drums and bass it gave us a great start to the record. Just getting out of your day-to-day headspace really puts you in a great space to be creative, and it’s something we’re aiming to do again (when our budget permits!).

ME: You’ve said that Cosmos has more “distinctive character” than your first EP? Could you elaborate on this? How does this latest release compare to your previous project?

WNR: So one of the main things we wanted to do with this EP was to work with an “outside voice” from beginning to end. We wanted to get a producer on board who wouldn’t just press the buttons and do what we told them, but have a creative hand in shaping the songs. We chose George Lever to work with, and he got really hands-on with our music – when you’re deeply involved in writing a song, it’s hard to step back and see how the whole thing fits together, and George provided a really useful sounding board.

Our debut release had a pretty wide spread of styles, from the almost radio-friendly “Time Travel” to the 9-minute masterpiece “Masks of a Burning Man,” and while we certainly wanted to keep this latest record sounding diverse, we refined our writing so all the songs shared the same DNA. Chances are, if you like one song on the record, you’ll also like the rest.

ME: When you aren’t recording, what else does the band do in their free time? Do you have any interesting hobbies outside of music?

WNR: Yeah, our hobbies are booking gigs, rehearsing, promoting, writing and generally doing all the behind-the-scenes work that keeps an unsigned band running! That said, James has been known to win the odd local snooker tournament, while Antoine cycles the 60-mile round trip to work in preparation for a two-week stint in the Pyrenees come Autumn.

WNR: Probably top of the list is He is Legend, a North Carolina-based alt-metal band. Amazingly, and unknown to us, George actually helped produce their latest record few just before starting work on ours, which was so cool. As well as them, I’ve recently discovered I Am Giant, a New Zealand (now in London) alt-rock band with shades of fellow Antipodean rockers Karnivool – their latest album Science & Survival is well worth checking out.

ME: Now that Cosmos is out, what is next for White Noise Radio? Do you have any plans/goals for the future?

WNR: Well we’re booked in for a few shows around the UK over the next couple of months, but we’ve also got an eye on the next release. We’re committed to keeping up a decent output of new music, so the writing cycle starts up again pretty quickly – we take ages to finalise songs, but we’re hoping to bring out some new material near the start of 2018.

Cain Miller is an aspiring writer who hopes to work his way up and gain notoriety for his material. Having written about film, television, music, and sports, Cain is always looking to gain as much experience as he can and continue to improve his writing abilities.
@cainemiller
Previous Gallery: New Kids on the Block at Prudential Center, Newark NJ 07.02.17
Next Gallery: Cabbage at the O2 Ritz Manchester 01/07/2017