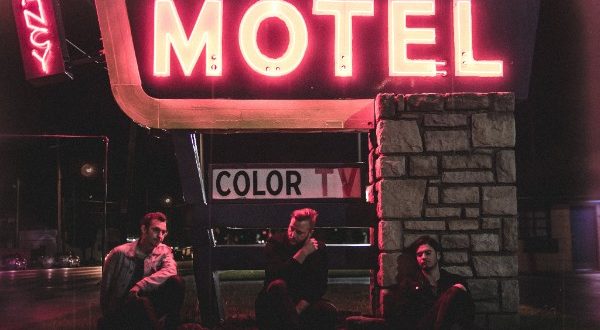 MODERN CHEMISTRY Release “Tripping Over You”

New Jersey rockers MODERN CHEMISTRY are continuing to ramp up their upcoming debut LP Everything In Gold with the release of their second single “Tripping Over You,” exclusively debuting over at Alternative Press. Produced by Paul Levitt (Have Mercy, The Dangerous Summer), the album will be self-released on July 7, 2017 with pre orders available here. The band’s record release show for Everything In Gold will be on July 8 at House of Independents, shortly before they take off on tour with Taking Back Sunday and Every Time I Die from July 14 – August 1

Carrying the same emotional weight of the previously released self-titled track, “Tripping Over You” picks up the energy boasting huge chorus that will get stuck in your head on the first listen. In the words of vocalist/guitarist Joe Zorzi, “This is one of my favorite songs we’ve ever made. I love the juxtaposition of the sad, slow verses into the big chorus. It’s always something we love to play with and this is my favorite example of it. I actually wrote the chorus years ago. I always loved it, but never found the right place for it. I started working on the verses and prechorus of this song and all the sudden, it just fell together perfectly. I think Brendan’s guitar work really stands out on this track, with the ambient drones throughout and that huge, spacey chorus lead.”

The amount of hard work and heartfelt artistry that Modern Chemistry put into their debut album has been a defining character trait for the band throughout their career. Since forming in 2012, they’ve independently released three EPs, including 2016’s Dreaming Adjacent, produced by Adam Lazarra of Taking Back Sunday. Lazarra praised the band’s passion, saying “They work so hard and treated every decision, no matter how small, with a lot of thought and great care. I’m very proud that they were gracious enough to let me into the process.” Speaking of the previously released single for “Everything In Gold,” Substream said the song was “A slow-building tune that opens the debut album perfectly.” Meanwhile The Pop Break stated that “Simply — this is a star-making single. It’s the type of song that’s going to get the eyes of the masses on these three young dudes from New Jersey.”

They also have earned their stripes on the road, touring with Frank Iero And The Patience in 2015 and playing major festivals like SXSW, So What!? Music Fest, Gentlemen of the Road, and Chicago’s Riot Fest. This past fall amidst mixing Everything In Gold, they played a sold out club tour with Mayday Parade and just last month they played Ohio’s Spring Fling Festival.

Modern Chemistry will be supporting Everything In Gold on tour this summer with Taking Back Sunday and Every Time I Die.