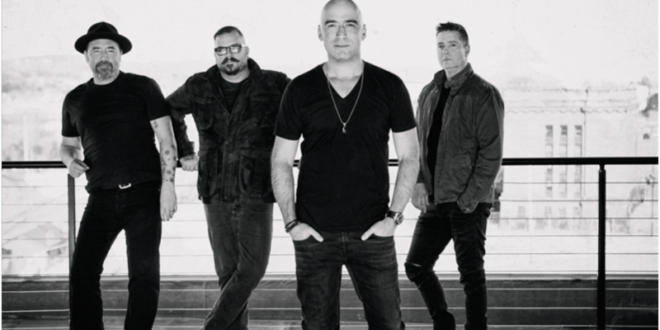 The recently reunited original line-up of +LIVE+—Ed Kowalczyk (vocals, guitar), Chad Taylor (guitar, backing vocals), Patrick Dahlheimer (bass) andChad Gracey (drums, percussion)–have announced they’ll mark the 25thanniversary of their 1991 debut full-length album, MENTAL JEWELRY, with adeluxe reissue digitally and physically via Radioactive/Geffen/UMe onFriday, August 11. For the package, Ed Kowalczyk wrote liner notes about the band’s beginnings including their monthly gigs at CBGB before they were signed to Radioactive Records. “Hilly [Kristal, the club’s owner] typically didn’t pay bands for showcase-type gigs, but he would give us $100 for gas for the three-hours-plus commute from old York [PA].”

The newly remastered package features an unreleased studio track (“Born Branded”) from the album’s original sessions; a club remix of “Pain Lies On The Riverside” by Public Enemy producer, Hank Shocklee;  two songs from the band’s September 1991 EP Four Songs; and an unreleased 1992 full concert at The Roxy in Los Angeles.

The 25th anniversary release of MENTAL JEWELRY will be celebrated with re-issues on Colored Vinyl, Standard Vinyl, Cassette and the Deluxe Edition on a two-CD set. Produced by Jerry Harrison of Talking Heads, the album was originally released on December 31, 1991 and includes the singles“Pain Lies On The Riverside” and “Operation Spirit (The Tyranny of Tradition).”

The multi-platinum band–currently on a world tour (see dates here)–partnered with RollingStone.com for the premiere of “Pain Lies On The Riverside” from the band’s Roxy show. Click here to listen to the song which “…begins with a jammy intro, with singer Ed Kowalczyk shouting, ‘The riverside is where I walk!’ to kick off the upbeat track. The band gradually builds to an ecstatic climax,” noted Rolling Stone.

Pre-order is available now with instant grat track “Pain Lies On The Riverside” (live from The Roxy, 1992). Click here for more information.

“I was really surprised to hear and experience again how fully formed we were as a young band by the time we played the Roxy show,” Ed Kowalczyk tells Rolling Stone. Chad Taylor elaborates: “For the most part, the audience was experiencing our songs for the first time. This meant that the band couldn’t rely on singles to keep the show’s momentum. We had already extended many of the album arrangements to carry us through a headlining set and this included ‘Pain Lies on the Riverside,’ a future single. There are so many improvised moments throughout the entire recording. We had to sell the drama of each song and you can tell that were both excited and nervous to perform in Los Angeles. The raw energy is something I doubt we could duplicate.”

Kowalczyk, in a statement from the band,says: “It’s really cool that we have this unreleased material from virtually all of the LIVE studio albums and that the limitations of the various media that we experienced early in our career have vanished with the digital/online revolution. Fans can look forward to more!” “Jerry Harrison deserves a lot of credit for getting so many early songs recorded,” explains Taylor. “Radioactive [Records] gave the band a budget for 12 masters but Jerry, a veteran recording artist sent a lo-fi demo that included 14 or 15 tracks to the label. He suggested that the label pick the 12 songs that would make the album. Since the album was initially released on vinyl, we were limited by the media format and over time, we simply forgot about the extra songs. Thankfully, this new release really captures the spirit of that era!”

Looking back at the full Roxy show, do you have any advice now for your younger selves? Says Kowalczyk: “I really don’t have any advice for LIVE circa 1992. Actually, it’s the reverse in a way; the experience of rediscovering the Roxy show recording is a window through which the sun of that youthful energy has shown on us again, helping to remind us of where we’ve been but more importantly, to inspire the way forward.” Notes Taylor: “I’m not sure the younger version of myself would listen to any advice I could offer, but I would be sure to tell myself to enjoy the ride, and to take care of each other.”

TRACKLISTING FOR 25TH ANNIVERSARY DELUXE REISSUE MENTAL JEWELRY:
DISC ONE:
Pain Lies on the Riverside
Operation Spirit (The Tyranny of Tradition)
The Beauty of Gray
Brothers Unaware
Tired of “Me”
Mirror Song
Waterboy
Take My Anthem
You Are the World
Good Pain
Mother Earth Is a Vicious Crowd
10,000 Years (Peace Is Now)
^Born Branded
* Pain Lies On The Riverside
< Negation
< Heaven Wore A Shirt
^ = previously unreleased
* = Hank Shocklee club remix
< = from 4 Songs EP (September 24, 1991)
DISC TWO (Live At The Roxy July 16, 1992):
Show Intro
Waterboy
Take My Anthem
Pain Lies On The Riverside
Susquehanna
Negation
You Are The World
Tired of “Me”
Heaven Wore A Shirt
Operation Spirit (The Tyranny of Tradition)
Good Pain
The Beauty of Gray
10,000 Years (Peace Is Now)