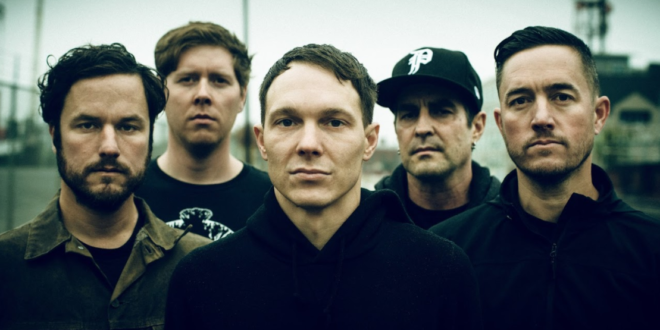 Less Art have teamed up with Brooklyn Vegan to stream new song, ‘Wandering Ghost’ off their forthcoming album.

Less Art is the alliance of brothers Riley and Ed Breckenridge of Thrice, Ian Miller and Jon Howell of Kowloon Walled City, and Mike Minnick, ex-Curl Up and Die. On Strangled Light, these five veterans bash out their own new version of post-hardcore – “post-hardcore by post-youths” is how they cheekily describe themselves, but this music is dead serious. The musicianship is world-class; the perspective is world-weary; the sound is fresh and urgent and crackling with feeling.

Strangled Light’s nine songs add up to a modern, muscular incarnation of the vibe set forth years ago by bands like Fugazi, Unwound, and Drive Like Jehu. Like those bands, Less Art rages – emotionally-charged and electrifying – yet also knows how to wield dynamics as a weapon. The lulls make the peaks even sharper.

Initially it was baseball that brought these musicians together: four-fifths of Less Art are the men behind baseball-themed hardcore band Puig Destroyer. Blasting through songs about bunting and stealing bases eventually led these four to want to start a “real” band – they enlisted Riley’s brother Ed and Less Art was born.

The band name might be lifted from a line in Hamlet, but ultimately it is raw emotion that drives this band. Using blunt phrases and the realest of tones, frontman Minnick sings of self-destruction on the micro and macro levels – candid lyrics address his personal demons as well as the collective deathwish leading all humanity to the brink. “Pessimism as Denial” plainly describes our species’ suicidal path: “We’re surrounded by prophets / Who think spilling their guts / Is the same thing as giving blood / We’ve eaten all the animals / We’ve burned down every tree / We’ve done so many wrongs… / This system doesn’t work / The world is better without us.”

The cover art was created by Jacob van Loon, whose work adorned the cover of Explosions in the Sky’s The Wilderness album.

Strangled Light is a thrilling debut – an entirely new, relevant vision from five men carrying decades of experience between them.