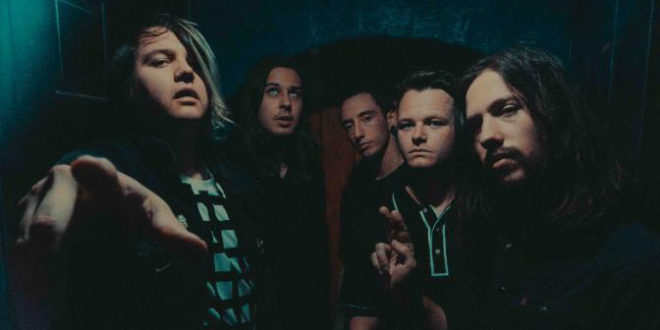 The Funeral Portrait Announce Tour with Marina City this August

Its been a great few months for Revival Recordings artist The Funeral Portrait who just wrapped a run with Islander and Bad Seed Rising. Today they are thrilled to announce an August tour with friends Marina City and Awake at Last, which kicks off August 11th in Spartanburg, SC (without Marina City) and will conclude August 25th in Toledo, OH. Tickets are available now via RevivalRecs.com!

The Funeral Portrait consists of vocalist Lee Jennings, guitarist/vocalist Juergie Sandstorm, guitarist AJ Pekarek, bassist Chris King, and drummer Stephen Danzey. Together they blend elements of rock and roll and heavy metal with a pop sensibility to paint stories of love, loss, anger, and grief onto a canvas of skillfully crafted tunes. The band kicked off in 2014 with their debut EP For The Dearly Departed, produced by Shawn Milke of Alesana/Revival Recordings, which features 6 riveting tracks including “Casanova (C’est La Vie)”Following their successful 2014 smash, comes their latest LP, A Moment of Silence which was released on December 16th. A Moment of Silence is unlike anything the band has done before. Recorded/Mixed by Matt McClellan at Glow in The Dark Studios in Atlanta, GA and Mastered by Kristofer Crummett, A Moment of Silence displays a more dangerous and honest side of The Funeral Portrait, telling the story of one man’s journey through the afterlife. Guitarist/vocalist Landstrom expands:

“In this universe there is eternity after death, but there is no god and there is no heaven. This man has been told his entire life that when he died, he would be greeted by God at the gates of heaven. Now he must drift and observe, waiting for the truth to reveal itself.” – Landstrom

Off the album comes “Like Father, Like Son,” a riveting song about the relationship the character has with God and how it is falling apart. Fans can stream the entire album in full today via Lambgoat here!

Purchase A Moment of Silence HERE!

Previous CREEPER SHARE VIDEO FOR NEW VERSION OF ‘MISERY’
Next THE SPEEDBUMPS ANNOUNCE NEW ALBUM, WHEN THE DARKNESS COMES TO BE RELEASED JULY 14