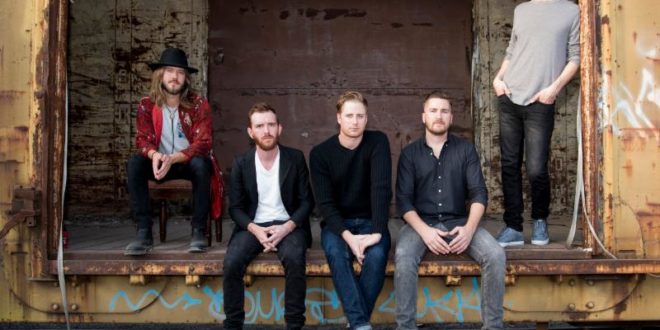 Nashville alt-rockers, Moon Taxi have announced the band will kick-off their 2017 North American headline tour this Fall that will include dates in select cities such as Los Angeles, Seattle, Chicago, New York City and more, plus three back-to-back hometown dates inNashville (with two of those dates at the revered Ryman Auditorium). Tickets go on sale this Friday, June 30th. Fans can visit ridethemoontaxi.com/tour for more details, plus see all tour dates listed below.

The band independently released new single “Two High” and in just weeks “Two High” has went viral  in the US and globally racking up over 8+ million streams. Its catchy hook and verses have struck a chord with their die-hard fan base around the world as “Two High” lyrically is “a song about hope,” expressed frontman Trevor Terndrup. “Hope for understanding, hope for acceptance, and hope for our future. We were inspired by the simple and universal peace sign. It’s a gesture we would like to see more of.”

“Two High” is a taste of what’s to come as Moon Taxi is currently recording the follow up to their last LP, Daybreaker (2015 BMG), that debuted #2 on the Billboard New Artist Chart. Over the span of their career, the five-piece have garnered national TV appearances on the Late Show with David Letterman, CONAN and Late Night with Seth Meyers, plus a performance on NPR World Café. Many of their singles have been a part of national commercials and TV spots including: McDonald’s, BMW, Nashville, MLB, NFL and HBO Sports to name a few. The members of Moon Taxi are no strangers to the stage, and their energetic live performance has landed them numerous major US festivals appearances, including making their debut at Coachella – performing mainstage – in 2016, plus giving riveting performances at Governor’s Ball, Bonnaroo, Lollapalooza, Austin City Limits, Firefly, Hangout and Forecastle festivals.

Previous Muse Announce Special SummerStage, Central Park Concert On July 24, 2017 — Concert To Benefit The Coalition For The Homeless
Next Nothing More Premiere New Video For “Go To War” With Monster Energy Aftershock