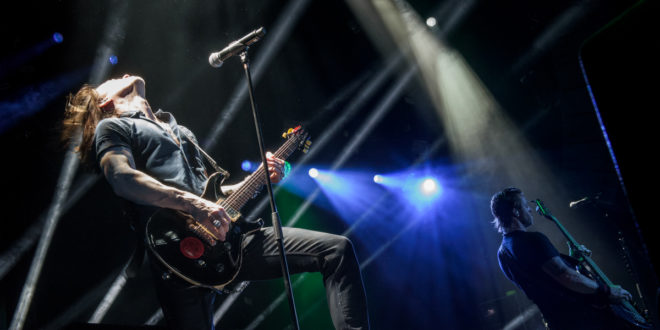 ALTER BRIDGE is on a mission: to continue to expand themselves musically while showing that they are one of the best live acts on the road today. Just recently, they announced the release of a new live album and rarities collection called Live at the O2 Arena + Rarities that captures one of the biggest moments of the band’s career, when they played their monumental show at London’s famous O2 Arena on November 24th, 2016. The band put together a clip with some of the finest moments of this landmark performance with the background music of their “latest track from The Last Hero, “Cradle To The Grave.”

Alter Bridge also recently announced another career milestone for themselves. The band is playing two nights at the iconic Royal Albert Hall in London on October 2nd and October 3rd. A 52-piece ensemble, The Parallax Orchestra, conducted by Simon Dobson, will back the band at these two unique shows. Adding to the excitement, both of these shows sold out in less than 7 minutes, another record first for Alter Bridge.

Live at the O2 Arena + Rarities is currently available for pre-order NOW (and scheduled for release worldwide on September 8th. The 3-disc collection contains a double live recording showcasing a variety of fan-favorites including “Show Me A Leader”, “Rise Today”, the Tremonti sung “Waters Rising”, the acoustic-driven “Watch Over You” and their mighty signature anthem “Blackbird”. In addition, this latest release contains an exclusive full-length “Rarities”-CD that features the never-before released tracks “Cruel Sun” and “Solace” that were recorded during the One Day Remains sessions. In addition to the regular 3 CD audio version, fans can go order the ultimate fan experience and get one of the limited deluxe versions which also include an exclusive ALTER BRIDGE documentary with plenty of interviews with the band, their crew and family, giving you an amazing glimpse behind the scenes of this legendary show at London’s O2 arena!

Right now, ALTER BRIDGE is on tour in Europe playing a variety of festival and headline dates. The band also has a short upcoming run in the US in August. Tickets for all show are on-sale and more information and purchase links can be found at https://www.alterbridge.com/tour.