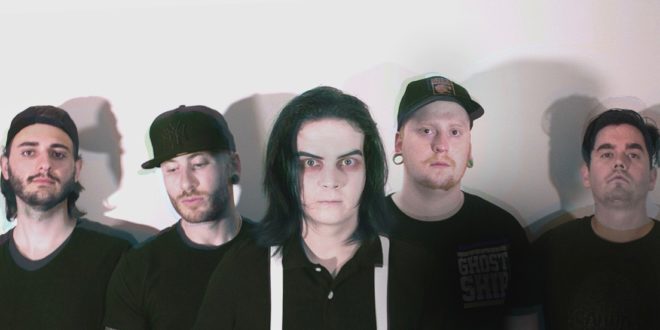 Horror-infused punk/screamo band One Last Shot from Syracuse, NY has released a new music video for their single “Grim Reminder”. The track premiered on the Vans Warped Tour website in anticipation for the group’s appearance on the festival this year. In the video, the band conceptualizes the idea that people are often afraid to express themselves the way they want to in life, due to the fear of judgement and ridicule.

“The smiling masks & matching shirts represent how people wear fake smiles on their face and dress the same to fit in,” says vocalist Jeremy Romance. “Even though they may want to express themselves differently, deep down inside, they’re afraid of doing so. At the end of the video they force the masks on us, symbolizing that some people would rather us be like everyone else, instead of expressing ourselves the way we actually feel.”

The video was shot by B-horror director Ron Bonk (She Kills, Night of the Strange) and the comes from One Last Shot’s latest concept album The Death of a Poet & All of His Friends. The “Poet” character is loosely based off Romance’s own struggles with life and death. At age 17, he was diagnosed with an autoimmune disease that has no cure and requires daily medication in order for him to stay alive.

The Death of a Poet & All of His Friends is available now on iTunes and Spotify.