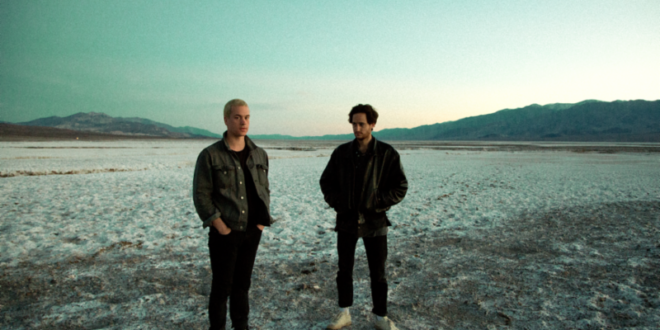 German post-punkers Lea Porcelain comprise a foundation on which Julien Bracht and Markus Nikolaus closely collaborate. Initially a long-distance project bolstered by the merit of two fruitful solo careers, the Frankfurt duo’s chemistry felt all the more solid. In fact, mere hours into their first ever in-person recording session, they vowed to pursue a band-based dynamic full time. The newly emerged band thus aims to create “universal” music, an idea based upon timeless stylistic and thematic elements, inspired partly by the widespread, nomadic touring ethics of their previous successes. Just before and throughout the year, Lea Porcelain provided a glimpse into the expansion of their sound through releasing a slightly extended handful of singles. That selection of material appears in their debut album, Hymns to the Night, just out last weekend.

The album’s opener, “Out Is In,” justifies the band’s diversity in its sporting multiple synth styles. On the bottom is a dark, resonant drone, followed by a soothing pad and complementary detuned arpeggio within. What ends up holding these elements together is the track’s percussion. It emits an interesting jagged grace—brisk and airy during the verses, while searing and somewhat militant in the chorus. Through its vibrant presence in the mix, the clean vocals stay centrally nestled amidst the surrounding instrumental involvement. Next is “Bones,” the 2017 kick-off single, which proves a more direct representation of their influences. Right away, its chord sequence and textures allude to Disintegration-era cure with modern expansiveness. The bass factor of the percussion hits with each kick and snare. It is an interesting implementation of dynamics that makes a normally simple arrangement excel in such a way. By the initial several bars of “A Year from Here,” my further expectations of their craft were met. Just the third song, the band makes especially effective use of their sonic canvas. What starts out a strum-by-numbers air-folk melody is promptly transformed by an unexpected, yet complementary backing rhythm. As I thought more about how these songs are played out in a thematic sense, I noticed a recurring sentiment—distance. This is from the perspective of life’s opportunities going way over one’s head to the point of regret, but also, the subsequent temerity to bounce back and push forward. Comprising the tail end of the first half, “Warsaw Street” and the succeeding “Similar Familiar” come across as courageous leaps into unfamiliar territory. Their synth structures bring a degree of mystery and intrigue, but at the same time, showcase an underlying diligence in maintaining the album’s momentum. Whereas the first vibe is somber and bittersweet, the latter is upbeat and more immediate its presentation.

Despite the structural shift, the album’s midpoint, “White Noise,” doesn’t necessarily suggest a continuation of positively nuanced melodies. In fact, it halts on a haunting interlude of sorts, centering on the arbitrary distortions that accumulate within one’s dreams. Subsequent tracks become murkier, enveloped in shrouds of reverb. Though to the album’s credit, this surprised me, and the sequencing of the songs feels natural for the most part—like a world of dreams inadvertently crossing over into reality. The first of the album’s latter tracks, “The Love,” promptly begins the album’s venture into some kind of shoegazing territory. I’d equate the experience to walking into the often-perpetuated dark side of limerence, wherein one’s thoughts become lost amid pursuing the other. From there, “A Faraway Land” expounds on having delved deeper into a dream state. The instrumentation feels like a tornado of amassed, wandering emotions, all the while the vocals maintain composure, with sparse but exceptional range. Even with this wall of sound, however, the dynamics still show quite a bit of presence while switching between phases. “Remember” plays like a resurgence of Joy Division, or, at the very least, a newly-discovered B-side from the band’s catalogue. Much like the discovery aspect, it’s as if the subject of the song is becoming more aware of their circumstances, having been left cold and alone. “12th of September” thereby acts an answer to this action, insinuating a persistent admittance of flaws in spite of being brushed off. The apex of a certain mental unraveling is the penultimate “Loose Life”. By this point, all of the elements are obscured, the vocals done so with a pronounced flange. However, the beauty of their chord sequence choices stays nonetheless intact. “Endlessly” then caps the album with a return to normalcy. Along with its more conventional structure, there is an improved balance of instrumentation. I appreciated the bittersweet build-up into the chorus, its implementation as if to ultimately reinforce that new start, and subsequent heavy-hearted courage to continue.

Overall, Hymns to the Night is an excellent display of stylistic and conceptual pertinence that resonates deeper with each listen. The band’s integration of singles into a full-length setting flows naturally, with each song playing as a direct—and, at times, unexpected—response to the other. Hopefully this is only the start of the band’s expanding their creative scope.

I come from a family who is passionate about all things music. I learned to sing at an early age, and by 13, had my very own Fender Strat guitar. I tried my hardest at learning all that I could. Because I was born with cerebral palsy, I had to teach myself an adaptive playing style. I learned to write and record my own music, despite these difficulties. In college, I started making great use of my writing abilities by reviewing music, as well as copy editing. I guess it's best to stick with what you know, while welcoming a fair challenge at the same time.
Previous Northern Virginia hip-hop duo RoeShamBeaux unveils their latest single, “Tequila Toes”
Next Album review: LANY