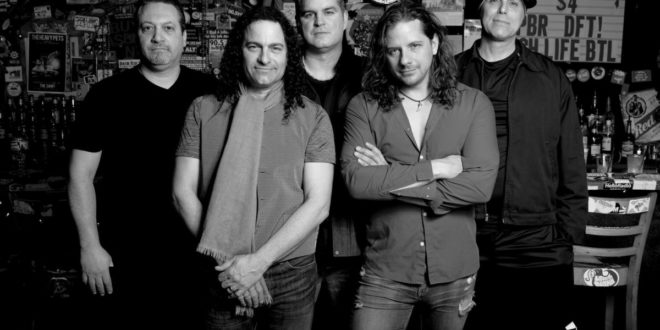 Veteran hard rockers Colossal Street Jam have continually proven a worthy asset of the New Jersey music scene. Releasing their debut album in 1993, the band showed honest promise during the decade’s alternative rock boom. Accumulative internal conflict led to the band’s hiatus in 1995, but that would ultimately serve them well in honing their craft.

Some two decades later, Colossal Street Jam is rekindled, with classic members Gene Potts, Sal Mara and Tony Flora joining newcomers Dave Halpern and Eric Safka. Their first record as a five-piece, Living Free, was released last year to rave reviews and surprising radio success. Now, a new record is in the works, and is slated for release in November 2017.

I caught up with Gene to discuss his formative period, the band’s latest album, the creation of new material, and how their current chemistry with one another has reached an indelible peak.

ME: Your sound is clearly influenced by hard rock of the mid-70s. What was your experience growing up with that music?

Gene: My father listened to a lot of that stuff. He was a big Grand Funk Railroad fan, and they just happened to become my favorite band. The influence from my dad and the stuff he played around the house was what I stuck with. I like a little bit of everything, but as far as original music and writing our own ideas, I like to stay in that vein.

ME: Once your profession pursuit of music began, what elements have been essential to your scene?

Gene: In New Jersey, the Asbury Park scene has been really strong and thriving. We’re normally known for Bruce Springsteen and Bon Jovi, but the other side has a lot of hard rock and alternative music, so there’re different styles out here. But the Asbury scene also has big concert venues, like the Stone Pony and the Saint, that we’ve wanted to be a part of. We were lucky enough to have been able to play those places.

ME: As I understand, Colossal Street Jam formed around 89, and has had a consistent live presence all these years, would you consider yourselves a live band first, and a recording band second?

Gene: Yes, we’re definitely a live band. We’ve had a hiatus for quite a long time, but we’ve all kept together doing different projects, whether it be an acoustic thing or original thing. Live shows are always the best. The guys we have are pros, but on top of that they are live players, feeding off of one another and the crowd. We love to go into the studio but there’s nothing better than a live show.

ME: Either way, the transition into recording was smooth. With Living Free, for instance, you’re taking that live aesthetic from your performances and translating it into the studio.

Gene: Definitely. We like to record our basic tracks live as a band and then we build along that foundation.

ME: Let’s talk about about the album. Since it’s been out, how do you feel about the reception it’s gotten?

Gene: It’s been great! We kind of put this record together for ourselves, and really didn’t know what to expect. But the second it got out, we’ve been getting radio play across the US and even some overseas. And I get to talk to people like you! So, obviously, the record’s getting out there, and the response has been unbelievable. Very surprising, but now that it’s happening, it’s a thrill for all of us.

ME: It must have been especially, given the international response.

Gene: Yeah! Not that it’s setting the world on fire, you know? But I get fan mail every day; another internet radio station picks it up and asks for mp3s or information. I’ll wake up, see something new and think, “Wow, this is still going!”

ME: My take on it comes directly from what I mentioned before. It’s like a spontaneous uprising of all that you’ve taken in life, and just unleashing everything you’ve got.

Gene: I like the way you say that! Thank you; I appreciate it.

ME: You worked with Tony Tee Lewis on this record, and have consider him the sixth member of the band. What is it about him that really resonates with you?

Gene: Two things about Tony. One, he grew up in the UK, so he knows a lot about the stuff that influences us—Led Zeppelin, Rolling Stones, Bad Company. Those three bands, and Grand Funk Railroad. He knew what we wanted also because he’s a great guitar player. But the other thing that makes him the sixth member of the band is that he made us play and record the best we possibly can. If he thought a take was great, or that we could do better, he’d be upfront, honest, and say, “Hey, let’s do this again!”

In the past, when I’d lay down a vocal, I’d give a song maybe two or three passes and say, “Alright, that’s good; let’s go with it.” On this record, there were times when a lead vocal took three, four hours, because he wanted me to continue to try different things and build upon what we were working on. He’s been a big, big plus. We’re actually going to the studio in two weeks to record the next record, and he’ll be with us again.

ME: From what I gather, he really knew how to word and direct constructive criticism.

Gene: Yeah, definitely. The good thing about where we are right now is that we listen to one another, and we listen to Tony. If I think something doesn’t sound right we let each other know without it being a problem. That’s what it was when we were younger with Colossal; we’d drifted apart because no one was listening to each other. But now we are, and we’re writing some of the best stuff we’ve ever written because of it.

ME: It is great stuff, even on the album you have now. The 70s influence is distinct, but what I also like about is the amount of space it has, and the breathing room given to each element of instrumentation.

Gene: That’s what we’re influenced by. With those bands, there was a lot of room to move around in the songs. If you have a basic foundation for recording, you can build on it when you get live. We have some songs that are open-ended so if the guys are feeling it, they can go off. Our guitar player’s amazing and our Hammond organ player is too. The rhythm section would just lay it down. They know how to extend parts, and that’s what we’d do. We built it based on the recording, and when we go live, we can do whatever we want.

ME: With this new album, is it part two, or are you starting from scratch?

Gene: We’re starting from scratch because of the new guys in the band. A couple of the songs that were on Living Free, we’re writing as a five-piece now. This is going to be a whole new record. We’re hoping to have it out in November, and it’s exciting. I think the new material is growing; it’s more jam-oriented, and has some excellent dynamics that I think were lacking a bit in Living Free.

ME: At this point, it’s about unity, and having a complete understanding of what each member is gunning for.

Gene: Definitely. It’s a family atmosphere. No one’s a rockstar; no one’s got the right answers all the time. We listen to each other, and we’re in a totally different mind frame. It’s because of live shows too. We’ve been playing a lot live, and that comradery helps bring the family closer together, you know?

ME: Your press release had an interesting quote you made, “In the old days, we used to do this to make money, and to be rock stars. Now, we just do this for us.” Do you feel that, given how the industry is nowadays, you push yourselves to be as authentic as possible?

Gene: I think so. With the way the industry is now, you pretty much have to do everything yourself. There aren’t any A&R guys knocking down the doors at your shows anymore like the old days. You have to be true to your music, true to yourself, true to your fans, and believe in what you’re doing. If you do that, then keep pushing. It will get better; people will respond to it, and I think that’s where we’re at right now.

In the old days, we were [pushing]. We had these dreams of grandeur that we were going to be the next Grand Funk or Black Crowes. What ended up happening was we got some interest, management companies, and a label that was coming to our shows. As it was going on, we got more and more impatient, did some [internal] fighting, and then just kind of imploded. The comment I made there was, “Hey, back then, we wanted to be rockstars; now, we want to be musicians.” There’s a good separation there, and like I’d said, if you believe in what you’re doing, you can’t keep going. If you believe in one another and can work together, that’s even better.

Gene: Well, I’d like to thank everybody for the interest. If they haven’t heard the record, they can check it out. We’re open to all; if people don’t like it, they can tell us; if they love it, they can definitely tell us. Check out the website and our Facebook. Download the record if you can; it’s everywhere. When the fans give their honest opinion, we love it!

I come from a family who is passionate about all things music. I learned to sing at an early age, and by 13, had my very own Fender Strat guitar. I tried my hardest at learning all that I could. Because I was born with cerebral palsy, I had to teach myself an adaptive playing style. I learned to write and record my own music, despite these difficulties. In college, I started making great use of my writing abilities by reviewing music, as well as copy editing. I guess it's best to stick with what you know, while welcoming a fair challenge at the same time.
Previous New Music Video – Above The Clouds
Next Fathom Farewell Release Music Video “Take This World”