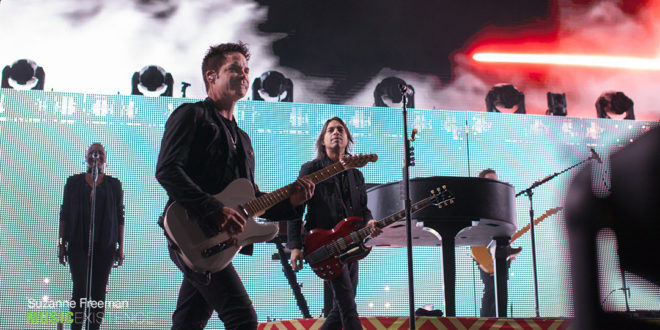 Train played in Camden, NJ last Thursday night at the BB&T Pavilion as part of their Play That Song tour. If you’ve ever seen Train perform live, you know they put on an amazing show using multimedia and physical elements. This show was no exception as they came out to their famous crown logo on the full-stage media screen behind them.

Lead singer, Pat Monahan is ever the entertaining front man, which he proved right away when he tossed his guitar high up in the air for his crew to catch. (They did, but everyone held their breath until it was safe.) Monahan uses the whole stage when he sings, often making eye contact and pointing to members of the audience.  During the song, “If It’s Love,” he reached into the crowd for a fan’s cell phone and took a selfie. He spent the rest of the song having cell phones tossed to him so he could repeat the process.

Train knows their audience, which is mostly 30-50 year olds and their children. Before Monahan played one of their oldest hits, “Meet Virginia,” he asked the crowd if they were even old enough to remember it, to which he was met with cheers and screams. When they played, “Save Me, San Francisco,” giant beach balls fell from the stadium ceiling so the crowd could bat them around until Monahan went into the more serious, “Calling All Angels.”

One of the many things Train is known for is incorporating their touring partners into their show, so for the duet, “Bruises,” he invited Natasha Bedingfield on stage to help him sing and later in the set, he had the members of OAR join him onstage for a cover of Paul Simon’s “Call Me Al.” They even played a pre-taped spoof of the original video with Monahan and OAR’s Marc Roberge playing the parts of Paul Simon and Chevy Chase.

After performing a few more songs off of their newest album, Play That Song, Monahan moved on to give the crowd a little music lesson, saying that inspiration for a song can be derived from the simplest of things, such as a bass line. The band then played a bass line as Monahan demonstrated what he meant by singing several pop songs that all shared that same bass line, including- “Shape of You” by Ed Sheeran, “Cheap Thrills” by Sia, “Treat You Better” by Shawn Mendes and their own song, “Lost and Found.”

They ended the show with an encore that included a rocking cover of “Heartbreaker” by Led Zeppelin and another of Train’s fan favorites- “Drops of Jupiter.” At the end of the last verse of the song, they set off confetti canons from the stage and the entire crowd was immersed in a colorful world.

Overall, it was an amazing show with a great mix of new songs and old favorites and lots of multimedia surprises. If you have a chance, catch one of the remaining shows on their tour.

Fun Loving Music Photographer and lover of live music in general. I am most likely to be spotted with a coffee in one hand and a camera in the other, somewhere in Philadelphia, New York City and everywhere in between. For more of my music photos: http://myphotos.bellemorephotography.com/
@bellemorephoto
Previous Monster Energy Houston Open Air Music Lineup Announced: Five Finger Death Punch, Prophets of Rage, Stone Sour, Marilyn Manson, Mastodon, Halestorm & Many More October 14 & 15
Next Gallery: Maxwell At The Prudential Center, Newark, NJ, 06/08/17