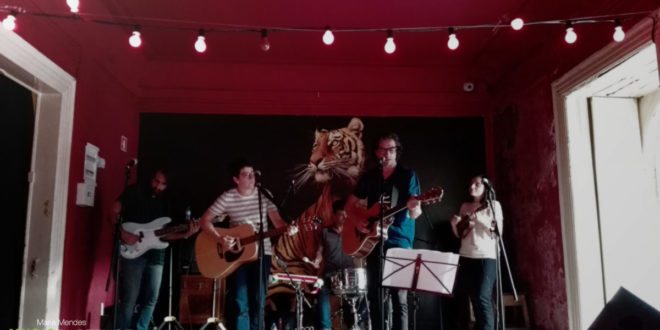 Lisbon has many small hidden places that often gather musicians and music lovers. In such a small country, you would not expect to find so many good musicians in so many different trendy sites. Casa Independente is one of those places.

The band They’re Heading West is holding a residency with different guests each month. David Fonseca was their first guest as he is an old friend from the band.

After releasing two EPs, They’re Heading West (THW) had their debut album out in 2015, as the result of previous monthly sessions with a wide range of Portuguese musicians as guests.

THW can be described anywhere from indie, pop, jazz or even folk mixed in their own particular way and that is why their songs have that special something. This kind of songs I want to listen at the end of a hot summer day when I need to chill out because they give you that relaxed feeling that you are somewhere else.

The band has 3 lead singers, Francisca Cortesão, Mariana Ricardo and João Correia. The harmony between their voices and the instruments: guitar, bass, ukulele is quite amazing enhanced by Sérgio Nascimento on percussion with a little drum kit.

This was an intimate show with very talented musicians that seemed to have a lot of fun performing. More like a friend’s reunion than a concert.

THW played songs: “Bangles,”“Well,”“Six String and the Booze,”“Me and My Gin,”“Kind of Nelson,”“Sunday is a Common Day,”“A Song to Celebrate our Love,” and “Large Amounts.” Fonseca joined them on stage for “Chama-me Que Eu Vou” a song for his latest album Futuro Eu, and for some covers of Roy Orbinson’s “She’s a Mystery Girl” or Harry Nilsson’s “Don’t Forget Me.”

Dolly Parton’s & Kenny Rogers, “Islands in The Stream” was one of the highlights of this evening either if because it’s a song you rarely see included as a cover in a live show in Portugal or because Francisca Cortesão and David Fonseca voices sound great together. Fonseca confessed that they have a lot of fun playing this song so much that they performed it again during the encore.

The encore started with Fonseca alone on stage with his acoustic guitar performing “When U Hit The Floor,” which is a deeply underrated B-side from Our Hearts Will Beat As One album. The performance was, as he likes to do it delivers, heartfelt and touching.

Whether you see him perform at small town festivities, where you do not have to pay a ticket, or in a fancy event or even a small one like this, as an artist, he commits himself to the fullest.

I was in Lisbon but it could be Nashville, you could sense that cool and magical vibe in the air. The authenticity of being in a room full of people, to feel that it is all so raw and all about the music.

It was blissful evening.

You can check THW here: