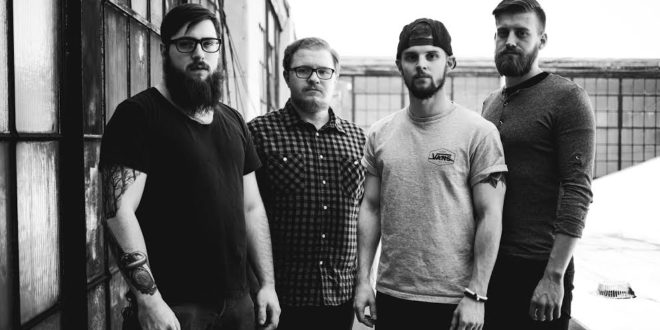 Rising metalcore act Hollow are set to release their debut LP Home Is Not Where The Heart Is on June 9th. With this project, the band focuses on apocalyptic lyrical themes and an interesting blend of metal and post-hardcore within their sound. In this interview, Hollow vocalist Josh Miller took the time to answer some of our questions regarding the album as well as what the future looks like for the band.

ME: Your debut LP Home Is Not Where The Heart Is is set to release on June 9th. What can you tell us about this project?

Josh: HINWTHI is our first album as Hollow and we couldn’t be more excited to release it. We honestly went through so many highs and lows trying to get this project finished that it’s going to be a huge sigh of relief to finally get it out to the public and we really hope and think you’ll enjoy it! It’s very angry and aggressive. We tried to make it fast paced at parts, but we also wanted it to have sections where you can breath with some softer sounds.

ME: Despite having your roots in metalcore, you’ve said that you will be combining different genres, such as rock and post-harcore, for this album. Can you give us an idea of what listeners can expect regarding this new sound?

Josh: There’s some post-hardcore vibes for sure with some almost poppy choruses during songs like “Delta” and “Coward King.”

ME: You’ve said that Home is Not Where The Heart Is was originally going to be a concept album, which is quite interesting. What made you decide against that idea?

Josh: Honestly, it was really difficult to write an entire album as a concept. We love the idea we had going, and we kept it in our song “Anomaly,” so it’s probably something we’ll keep going in our future albums. I don’t know if we’ll ever have a full album as a concept, but definitely certain songs that will continue the story we wrote in “Anomaly.”

ME: Could you see the band creating a different concept album sometime in the future?

Josh: Probably not a full album, but definitely sequels to “Anomaly” in later albums more than likely. We love the idea of post-apocalyptic wastelands.

ME: Your lyrics seem to focus on a desolate future for the world. What about this concept captures your attention? Why do you gravitate towards these lyrical themes?

Josh: The idea of that type of future fascinates us. We love movies like Mad Max (obviously), so we try and focus our ideas towards something like that.

ME: You have described your music to be quite emotional. Specifically, what emotional impact do you hope to achieve with your sound?

Josh: To be honest, we’re naturally pretty angry people. I think if there’s one emotion that’s going to come through in this album it’ll be anger. A few songs, like “American Dream” or “No Offense,” are a tad more pissed than the rest.

ME: Who are some of your biggest musical influences?

Josh: For me personally, The Word Alive and Ice Nine Kills.

Josh: Current artists might throw some of you off a bit. I’ve really been on a rap kick lately for whatever reason. I listen to a lot of Mike Stud, Kendrick Lamar, and Drake. As far as metal bands go I’d say Wage War and Beartooth.

ME: When you guys aren’t in the studio, what are you doing in your free time? Do you have any hobbies?

Josh: We all work normal jobs, so we spend a lot of our time doing that (unfortunately). Aside from that though, I spend a lot of time gaming. I’m either gaming or at the gym.

ME: Now that you have released your debut LP, what is next for the band? Do you have any specific plans/goals?

Josh: Tour! We want to start touring like crazy and promoting Home Is Not Where The Heart Is. Hopefully we’ll see you all very soon.

Home Is Not Where The Heart Is is scheduled to release on June 9th.

Cain Miller is an aspiring writer who hopes to work his way up and gain notoriety for his material. Having written about film, television, music, and sports, Cain is always looking to gain as much experience as he can and continue to improve his writing abilities.
@cainemiller
Previous Gallery: Hellyeah Live At The Marquee Theatre In Tempe, AZ 06/02/17
Next Kevlar Releases Music Video for Cover of Katy Perry’s “Dark Horse”

Earlier this month, Jam Lemon Records marked its 11th year as a label. Headed by …