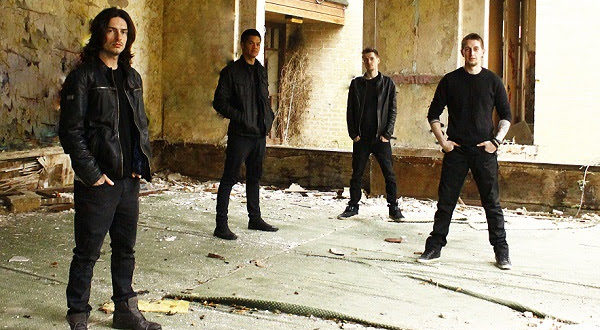 With their debut EP Some Things Matter, Cambridgeshire quartet Hollowstar lay down a set of abrasive tracks that garner the styles of classic 1970s/1980s hard rock and heavy metal. While the band’s career is still young, this debut project indicates that they possess a good amount of promise in the modern rock scene thanks to their thunderous sound and engaging performances.

The opening track “Lay Down” starts the EP off on a good note, dishing out a hearty blues rock riff. The guitar work itself isn’t overly intricate but it does its job of creating a heavy tone. This rhythmic guitar work heightens Joe Bonson’s powerful vocals and escalates to a surprisingly catchy chorus. Towards the end of the track, guitarists Phil Haines and Tom Collett are truly given the opportunity to showcase their chops when they deliver a top notch solo to conclude the song. Both guitarists also shine on the track “New Age Lullaby.” The guitar sounds here remind me of Tony Iommi of Black Sabbath, specifically their classic Vol. 4 LP, with maybe even a little bit of Slash influence thrown in there as well. The instrumentation as as a whole seems rooted in classic rock though it carries enough bite to fall under the hard rock/metal tier.

This style, specifically the nod to 80s metal, is noticeable on the track “Feel the Burn.” This is a change of pace for the EP considering that the track is the closest thing Hollowstar come to creating a ballad. The way “Feel the Burn” starts off slow and then transitions into electrifying guitars and pounding percussion, courtesy of Jack Bonson, draws comparisons to noteworthy 80s acts like Def Leppard or maybe even Motley Crue to a degree. The tracks “Future City” and “Guilty” continue the 80s tribute train, combining elements of hard rock, classic rock, and metal in similar fashion to the likes of Guns N’ Roses. These moments should prove to be enjoyable to fans of older rock music, specifically any of the bands listed thus far.

Hollowstar definitely present a vintage homage to 70s and 80s hard rock, so much so that one might question if it’s actually an accidental fault. While the sincerity is clearly present, some listeners might find that this EP doesn’t exactly bring much new material to the hard rock genre. When experiencing Some Things Matter, one might wonder why he/she shouldn’t just listen to the very same bands Hollowstar pay tribute to, such as Black Sabbath, Deep Purple, or Led Zeppelin. While that is a fair critique, my retort to that claim is that Hollowstar offer enough modern flair to distinguish themselves and not create a dated sound. Hollowstar draw inspiration from older rock acts but they modernize their style in similar fashion to bands like Clutch or even Altar Bridge to an extent. Yes, their music includes various nods to classic metal and hard rock, but it’s also original enough thanks to their updated sound to appeal to those not just listening for nostalgic purposes. Hollowstar’s music carries the ability to likely unite fans of both old and new hard rock and thus become a powerful voice in the community.

While it will take more time for Hollowstar to develop their own distinct style, Some Things Matter offers a quality introduction to the band’s talents. For a debut EP, the band shows a clear amount of potential and that’s the most one could ask for from a project like this. Their songs are hard hitting, the musical talent is present, and Hollowstar show an obvious drive to make a big statement in the current rock scene. Within the next few years it wouldn’t be surprising to see Hollowstar release consistently appealing material that expresses the straightforward essence of rock and roll.

Cain Miller is an aspiring writer who hopes to work his way up and gain notoriety for his material. Having written about film, television, music, and sports, Cain is always looking to gain as much experience as he can and continue to improve his writing abilities.
@cainemiller
Previous Gallery & Review: Ratt at Concord Music Hall – 6.2.17 Chicago, IL.
Next Art of Anarchy Announce Tour Dates For July/August, 2017