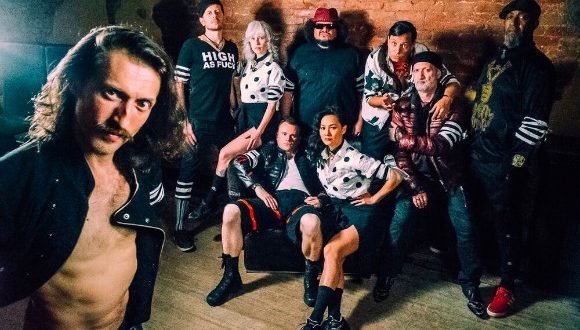 GOGOL BORDELLO To Release “Seekers and Finders” on Aug. 25

“Seekers and Finders is just a very magical and playful record for us,” says frontman Eugene Hütz of renowned gypsy punk band GOGOL BORDELLO about their new album, the seventh in their wide-ranging oeuvre which comes out August 25 , 2017 via Cooking Vinyl. “It just feels quite complete in capturing the Gogol familia transcontinental lifestyle, every side of it… the Good, The Bad, and the Snugly.”

Written over an extended time on three different continents, Seekers and Finders finds the nine-piece multi-cultural band in top form – an aural party of violins, accordions, trumpet, marimba amongst the standard rock basics of guitars, drum and bass.  “I was still bouncing between Latin America and Eastern Europe when songs were emerging, but finally, as soon as I moved back to New York, it all came into focus… as it always did for me here,” he explains.

The first released track and lyric video, “Saboteur Blues” is a frenzied punk rocker that flips a middle finger in the face of French philosopher René Descartes. “This song is about the full commitment to the moment and putting the end to this self-sabotage… and going on a rampage with it,” Eugene says. “Our lives are royally sabotaged by our thinking being stuck in our past or future.  Girls in French mock-flirt the famous crap fuck shot philosophy ‘I think therefore I am’ of Descartes, while the band is clearly offering the alternative ‘I feel, perceive and experience, therefore I motherfucking rock’.”

Kicking off with “Did It All,” an incendiary exchange of violin and accordion licks, bolstered by Eugene’s full-throated ensemble vocals, Seekers and Finders injects an adrenaline-rush into the current music bloodstream. The lilting and breezy title track features fellow Eastern European and close personal friend Regina Spektor who duets with Eugene, adding a comfortable cushion to his wide-eyed and immediate vocals. “It’s the duet of the wandering Jew and the roaming gypsy by the campfire, which we represent most perfectly,” he adds.  The album’s excitement doesn’t relent until you’re left breathless with the final fade of “Still That Way.”

Not content to keep the music in its recorded form, Gogol Bordello have announced a full-fledged headlining North American tour to bring the excitement and dynamics to the stage (tour dates below).  Tickets will go on sale on Tuesday, June 6 at 10am local time (with the exception of Burlington which will go on sale at 12noon ET) and can be purchased here. NYC’s brass/woodwind/drums juggernaut LUCKY CHOPS will be direct support.

Formed in 1999, Gogol Bordello took their style of Eastern European-influenced gypsy punk and doused it deep into the underground rock of New York City. Having worked with numerous grandmasters of production including Rick Rubin, Steve Albini, Andrew Scheps, and Victor Van Vugt, Seekers and Finders brings the band full circle with Eugene taking over the producer’s chair.  “As the new songs were emerging, I had a feeling that Seekers and Finders was going to be such an intimate record that, for this time, I felt the need to get behind the wheel myself and try marry the two: everything we learned from grandmasters with the Original Gogol Intention.”

With this album in hand, it seems like not only did he marry the two, he’s throwing one hell of a honeymoon.