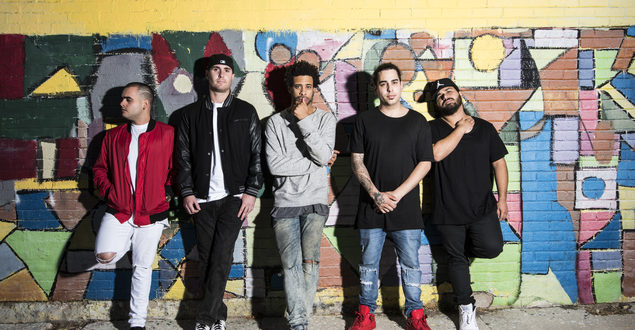 Volumes will kick off a North American summer tour as support to Born Of Osiris on June 23. Full tour dates listed below. The band has already had a busy year, having been on the road with Born Of Osiris for The New Reign Part I Tour, headlining multiple shows across the U.S., and making stops at some of rock’s biggest festivals including Welcome To Rockville, Carolina Rebellion, and Northern Invasion.

If Volumes can be defined by two things, it’s a commitment to heavy, dynamic music…and confidence. The Los Angeles-based metalcore quintet, rounded out by Myke Terry [vocals], Gus Farias [vocals], Diego Farias [guitar], Raad Soudani [bass] and Nick Ursich [drums], are ready to take on the world. After parting ways with former vocalist Michael Barr, the band welcomed former Bury Your Dead vocalist Myke Terry into the fold, who brings a fresh twist into the mix with his high-energy and vibrant charisma. Having always been a standout in their genre for having two dynamic vocalists, utilizing different ranges of singing and screaming to create a layered and volatile sound, Volumes is ready to embark on the next chapter – building on their finesse for creating a unique fusion between intricate patterns, melodies and aggressive metal. The upcoming release, Different Animals, produced by Brandon Paddock (Set It Off, Palisades, Black Veil Brides), was named one of Alternative Press’ “Most Anticipated Albums of 2017” and early singles have already received praise from Rock Sound, Metal Injection and more.