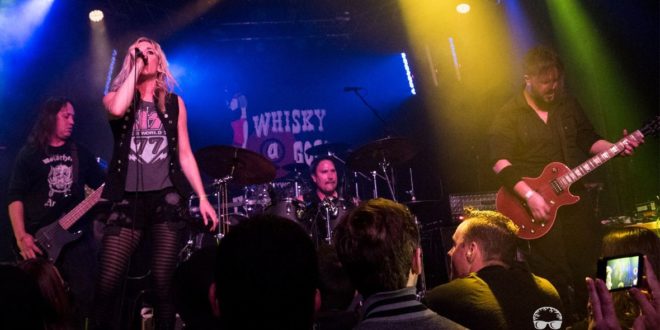 LA Based, Melodic Metal band Fall Of Man has released the Official Music video for “Lullaby”. Filmed and directed by Evan Cantrell and Greg McKarus at New Kingdom Productions, “Lullaby” is off of their 2016 EP Hallways and Doors.

Lullaby is about my own experience with spiritual warfare – specifically in the form of evil, demonic dreams. I had those types of dreams ever since I was a small child and they intensified up ’til just a few years ago. Both the song and video represent the process I’ve gone though to gain the upper hand over those evil, demonic forces. – Erica Barile

Connect with Fall Of Man:

Several months after Mike and G started jamming together, Ben Reiss (bassist) joined the band. The three of them remained an all-instrumental act until 2012. While in the process of searching for a lead vocalist, Erica Barile jumped in to lay melodies over some of their tracks. After a few rehearsals, things started falling into place – she’s been their front woman ever since.

Ben Reiss made his exit in 2013 and shortly after Dan Scala became Fall Of Man’s bassist.

Fall Of Man played their first show at the City National Grove of Anaheim, followed by performances at The Whisky A Go Go, House Of Blues Sunset Strip, and Canyon Club. They’ve opened for acts including Rhapsody of Fire, OTEP, One-Eyed Doll, James Durbin, and Amorphis.

Their latest EP Hallways and Doors dropped on April 30, 2016.

The band is currently booking shows in the Los Angeles area for summer ’17 and will be recording new tracks this fall.

If you’re in the mood for something loud, heavy, rich, and melodic, Fall of Man will satisfy your musical appetite; wrapping an appealing combination of sounds and genres into one brilliantly unique package. If you like powerful yet delicate vocals, thoughtful and bold lyrics, chunky and memorable riffs, heavy drums, along with a rich, complex, and original composition style, you’ll dig Fall Of Man.

Previous Alter Bridge Set To Release “Live at the O2 Arena + Rarities” September 8th
Next Gallery: Against Me! at Slam Dunk North, 28.5.17