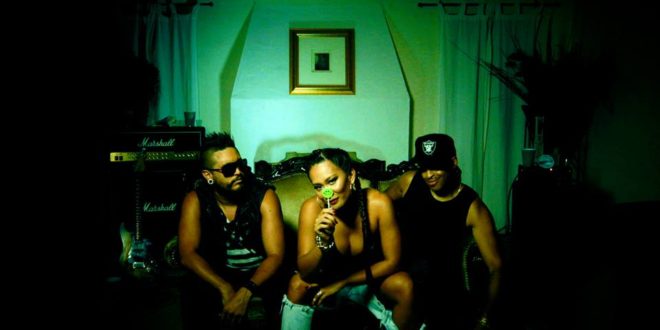 Gaining over 74,380 streams in under two weeks, Los Angeles urban outfit ZupaNova released music video for the latest single, “W.D.W.A” (Where Dat Weed At) alongside a free download of the track via YouTube.

The 3 piece worked with LA’s Couture night club to bring together a music video release party beside DJ JAM-X, and later appeared on Dash Radio for their feature of the song, which was released independently.

This song takes a somewhat different turn from ZupaNova’s former sound. Despite the same high-energy as you may find in songs like 2013’s “Killin It”, “W.D.W.A” takes an understandingly mellow approach for its subject matter, and this time, is made up of more distorted and unclear vocals from Davy Brown, but introduces visuals that bring the track to life. Fitting clearly with the sound and overall stoned energy of the track, gang vocals along with the placements of green in cups, clothing and an overall tint to the video in some places give this the potential vibe to be the next party anthem.

The video is seen through a thin veil of smoke, and is clearly set towards a positive influence on the drug that is (medically) legal in LA. With a loud underlying melody through electronics and synth, Kimala’s female vocals in the centre of the song bring it into a fuller number throughout, from a repeated murmur between versus to her solo in the centre of the song that brings it to a high-point before slowly returning to euphoric house-parties, slowing the sound once again and bringing it to a close through a precisely placed guitar solo that is shown amongst clips of smoke and dancing, but almost mimics the electronic element of their approach in this sound, giving it the maturity it needed to bring ZupaNova back into the hip hop world.

You can find ZupaNova on Facebook here, and SoundCloud here.