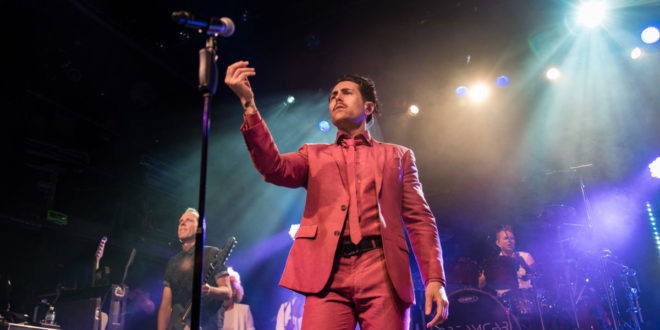 The 80’s New Wave supergroup, DREAMCAR rolled into New York City’s Irving Plaza this past Friday night. Made up of No Doubt’s Tom Dumont (guitar), Tony Kanal (bass), and Adrian Young (drums) alongside AFI’s Davey Havok (vocals), the band who’s debut album dropped only a week prior, was received warmly and enthusiastically.

I have to admit that I went into this show having heard the bare minimum of the band’s debut release. I wanted to experience the work live as it’s meant to be heard and was not disappointed. DREAMCAR sold their brand of New Wave throw-back with incredible ease. Echoing shades of Depeche Mode, The Cure and Duran Duran among other 80’s chart-topping names, DREAMCAR presented something fresh, if not a little unexpected. Proving himself completely versatile once again, Havok commanded the stage with a flamboyant grace that was a thrill to watch. The band’s chemistry was palpable, like old friends jamming a ridiculously catchy set of tunes.

The limited song catalog naturally kept the set tight. In addition to a complete play-through of the debut album, DREAMCAR also threw in a cover of David Bowie’s “Moonage Daydream” and INXS “Don’t Change.” Both of which fit the night’s poppy-fun mood so well, they could have been originals.

While this leg of the tour will wrap up in a few days at The Vic in Chicago, I don’t expect DREAMCAR to go away anytime soon.