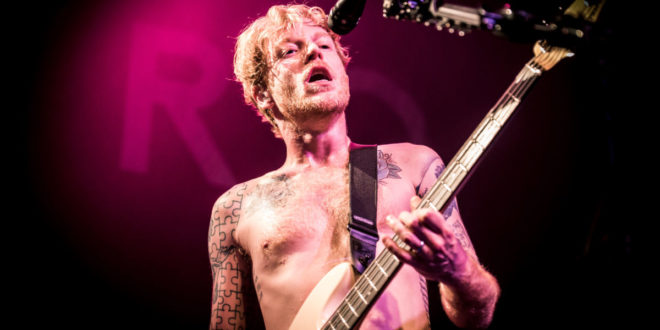 Kilmarnock, Scotland rockers Biffy Clyro have long since established themselves as rock royalty across the pond in the United Kingdom.

Overseas the band regularly sells out 20,000 plus seat capacity venues while touring on hit singles and number one records. They’ve also leveled up to the degree where in recent years they have even headlined some of Europe’s most revered music festivals including Reading and Leeds.

Despite their success in Europe Simon Neil (guitar/lead vocals) and the brothers Johnston, James (bass) and Ben (drums), have been unable to translate that kind of stardom to the United States market.   The strangest part of this may be the fact that there doesn’t seem to be any clear reasons as to why the Biffy Clyro mother ship has yet to launch here in the U.S.

Larger than life-sized sing-alongs, hard charging prog-rock that rattles asses off seats and kinetic live performances that have audiences begging for more are usually easy sells to America’s masses.

That’s not even getting into the fact that many UK based bands lacking the track record and quite frankly the talent of Biffy Clyro, have executed this same musical game plan to a T in terms of bridging their overseas success into North American stardom.

One positive for the band’s North America fans versus their European counterparts is they’re gifted the unique opportunity to chant “Mon the Bif” inside the halls of music venues that are typically one-tenth to even one-twentieth the size Biffy normally plays to overseas.

I actually ran into a young man and his mom who were from London and he explained that he had deliberately flown his mother over to see Biffy Clyro play in Baltimore as a Mother’s Day present because it was cheaper than trying to get her two tickets to one of the band’s always sold out shows in the UK.

The evening’s performance was initially ignited by the lads stoically taking to the Rams Head Live stage.  The band stood in place motionless for a few brief moments before feverishly launching into Ellipsis’ most “Biffy-esque” track, “Wolves of Winter.”

What’s more rock and roll then starting a show with a song inspired by a David Attenborough documentary about a pack of wild territorial beasts?

The band’s latest release, Ellipsis, hasn’t been as well received as Biffy Clyro’s previous three releases. 2013’s Only Revolutions, 2009’s Opposites and the record that help propel the band to international super stardom, 2007’s Puzzle, which were all universally praised.

The new record has been criticized for of all things, being different.  Most fans should have seen this change in direction coming at some point though, as how many times could Biffy Clyro really put out records primarily rooted in maniacal time signatures and anthem oriented choruses?

Give Neil and company credit for at least trying to reach outside their comfort zone this time around.  Whether or not you agree with the band’s choices for Ellipsis most should welcome the alternate approach Biffy Clyro took in terms of creating their new album.  Why?  Because it means the band is actually still trying to innovate and challenge themselves.

Neil commented in an interview with NME last year on this topic stating, “We’ve always had people who think we’re great and people who think we’re terrible. I want it to be that way. I don’t want us to be a reliable band. No one wants the good old fucking Biffy Clyro. It’s not romantic or mysterious.  I want it to be, those fucking nut jobs, what are they doing?  Hopefully this album (Ellipsis) will remind people we’re plugged into different mains.”

All that being said, outside of “Wolves of Winter,” the tracks off of Ellipsis the band played in Baltimore, at times, lacked the intense punch of Biffy Clyro’s typical live material.

It is worth noting though that Baltimore is not exactly known for being a city that has fervent rock music fan base. Thus it was hard not to take notice of the fact that the 1,000 plus seat Rams Head Live may have been at a quarter of its capacity and it’s difficult not to imagine that the band may have been affected by this on some level.

Sometimes not having confetti firing cannons, extensive laser and light shows and other over the top production values can be a blessing, as their absence can force bands to rely on making connections with the audience via the level and power of the performance alone.

This is exactly where Biffy Clyro shines more than the many of their contemporaries.  One of the primary strengths of the band has always been their raw live performance and the natural symbiotic kinship they’re able to make with the audience at each and every one of their concerts.  Whether you love or hate the band’s music there is no denying the fact that the boys in Biffy Clyro are just flat out likable.

Many of Biffy Clyro’s songs are designed for thousands to chant in unison along to.  The effect these sing-a-longs can have in venues housing only a few hundred souls hundreds can be uniquely powerful. The cozy confines of the smaller venues can create an organic force that has the ability to generate more than few emotionally intense experiences.

The band’s performance at the Paradise in Baltimore didn’t just flash one or two of these compelling moments, the vast majority of the show was anchored by many of them.

Stand outs on the evening included brilliant venue-wide and impromptu sing-a-longs such as, “Many of Horror,” “That Golden Rule,” “Black Chandelier,” and “Mountains”

Biffy Clyro probably have earned and deserve the kind of success they’ve achieved in Europe here in America. I’m guessing though that Neil and the Johnstons are happy playing to any size crowd, on any continent, so long as they get to continue to play music with one another while also having the opportunity to share it with any and all citizens of the world.

All Writing and Photography: Robert Forte

Robert Forte attended Northeastern University in Boston, MA pursuing a degree in journalism with a concentration in public relations. After working in print journalism for United Press International in Beijing, China and returning to the U.S. to work in corporate public relations he moved into technology sales. Robert currently resides in Asheville, NC where he now co-owns a start-up technology sales company. Additionally Robert serves as the Music Editor for AskAsheville.com while also serving as the principle in-house concert photographer for the three main concert venues located in downtown Asheville. Robert has been writing and doing concert photography for various media outlets for the past twenty plus years in an effort to support all genres of music and his on-going passion to continue to bring great content to music fans across the United States.
@bruins7140
Previous Gallery: Dreamcar at Irving Plaza in New York City, 05.19.17
Next Album Review: VA – Music For Everyone