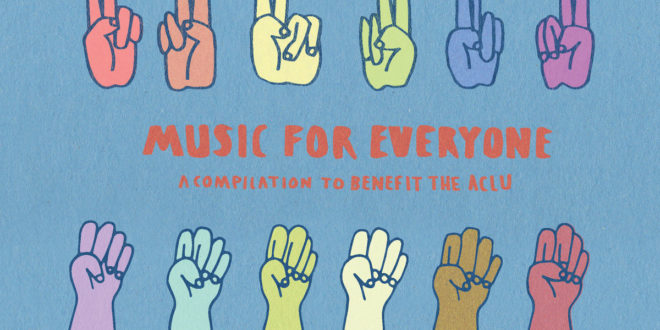 Album Review: VA – Music For Everyone

Music For Everyone is an American Civil Liberties Union-sponsored project that could not be more relevant today. With comprisal input by John Nolan of Taking Back Sunday, Collective Confusion Records, as well as the Sub City non-profit, this compilation is full of unreleased—and all the more timely—material to stress personable sentiments amid the rampant adversity of our current political climate. Nolan states what future conditions may arise because of continued disarray. “In the next four years, there is a lot of potential to see policies that will discriminate against people of color, Muslims, women and the LGBT community.” He emphasizes, “The ACLU has a long history of fighting discriminatory and unconstitutional policies and I wanted to do something to unite people in support of that fight.” When the compilation is purchased, all proceeds will be contributed toward the organization. As of yesterday, the compilation reached over half of its projected goal.

From the initial bunch of tracks, Anti-Flag’s demo version of “Burning the Shame” kicks things off. There’s a definite rawness to it that persists through each of the song’s elements—the sizzle and crackle of the percussion, and the complementary sharpness of the guitars and vocals. At the core of the track is a melodic, harmonized bassline that, even in its contrast, holds tenacious ground amid its anxiety-based thematic leanings. Next up, Chris Farren’s “Always” and Taking Back Sunday’s “Just A Man” sport two distinct styles that come across as lighthearted, but deal with respect and acceptance of individuals despite their flawed behavior. The grunge band Potty Mouth then expounds upon negative aspects of human nature in “Twisted,” with a very L7-like arrangement from the song’s chord sequence. To a deeper extent, it highlights the measures with which one’s intended casual sense of humor is put in negative context, and taken for much more than it should be. Further, Travis Hayes’ live Nu-Tone performance of “Honest Man” carries a straight-ahead indie rock feel. Matching are his forthright lyrics, featuring personal anecdotes of composure in deterring emotional circumstances, and not being afraid to express dismay. Already, a profound sense of stylistic and thematic variety is present as each song progresses.

Whereas the first side is characterized by an angle of tenacity in varietal relationships that have gone awry, that of the second side contains a somewhat greater spiritual emphasis. “Believe in Me” by James Dewees and John Nolan takes on the notion of distancing oneself from the plethoric, bordering devilish spectacle of politics and to simply be guided by their internal faith. The airy piano works well with their vocal tonalities, while the light string accompaniment accentuates the track as a whole. Subsequently, Frank Iero’s “Getting into Heaven Can Be Hell,” is a disenchanted, up-tempo punk jam in contrast, but maintains the notion of being deterred by outside influences. At the halfway point of the track, a pulsating ‘tic-toc-tic-toc” represents a type of mental strain from thoughts having accumulated. That sentiment is again echoed in the Baggage track, “Half Full,” wherein a once peaceful hometown has become ridden by chaos to the point of it being imprinted as a regular occurrence. With that comes a gradual disconnect from one’s surroundings, as much as a distrust of time and general humanity. Perhaps the most effective expounding of the theme is in the solo-folk “Sinn” by Cameron Boucher. Something in the subtleties of his performing style has always intrigued me. His seamless blend of near-whispered tonality and picking guitar aptly convey a sense of numbness, especially in the context of this compilation. Here, the subject is swamped by low self-worth, and contemplates a bleak outcome based on suicidal ideation. Later on, “American Skies” by Gravel Kings reverberates the theme of obliviousness, particularly by way of being all talk as opposed to making progress. With each layer of addition, the song proceeds to highlight our unification on a presently small scale, but with hope that it will extend. On the soulful final track, “The Day After Tomorrow” by LOLO, a message of “action without distraction” is sensibly implemented. Given the song’s simplicity, the feel-good rhythm of the vocals and guitar sets in fast. Much like the previous song, it empowers a more positive mindset, letting listeners know to make the most out of the shine, even if very little, that exists each day. This way, a lasting hope insinuates that those days will become easier to live out fully with continued progress.

Overall, Music For Everyone showcases some fine punk and alternative talent from past to present—all for a worthy cause. Whether the artists were aware of each other’s contributions, the album ultimately flows extremely well. By the success of this project, we are one step closer to building a more inclusive America, and for the long term, a better world.

For more information on involvement with Music For Everyone:

I come from a family who is passionate about all things music. I learned to sing at an early age, and by 13, had my very own Fender Strat guitar. I tried my hardest at learning all that I could. Because I was born with cerebral palsy, I had to teach myself an adaptive playing style. I learned to write and record my own music, despite these difficulties. In college, I started making great use of my writing abilities by reviewing music, as well as copy editing. I guess it's best to stick with what you know, while welcoming a fair challenge at the same time.
Previous Biffy Clyro – Rams Head Live – Baltimore, MD – May 15, 2017 – Show Review & Gallery
Next Gallery: The Struts at MMRBQ 2017, Camden NJ