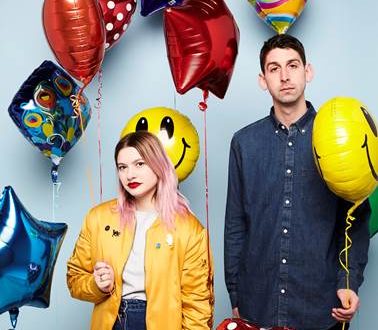 Emo heavyweights Tigers Jaw have had an interesting path thus far in their careers. Starting off as a lo-fi indie rock outfit, the Pennsylvania rockers quickly rose to fame with their 2008 self titled LP, a record that I still consider to be one of the best products of the modern emo era. Tracks like “The Sun,” “Plane v. Tank vs. Submarine,” and “I Saw Water” have become staples of the band’s live sets thanks to their honest, personal lyrics and sincere performances from each member. However, as Tigers Jaw’s popularity continued to rise, in 2013 the band announced the departure of drummer Pat Brier, bassist Dennis Mishko, and even guitarist/vocalist Adam McIlwee. The loss of these members left only guitarist/vocalist Ben Walsh and keyboardist/vocalist Brianna Collins. Before officially breaking up, the band came together and released Charmer in 2014. This album fully epitomized the band’s losses. Instead of a bitter split, Charmer resembled a somber farewell between band members. It was a tough pill to swallow for many fans in terms of the album’s focus, though it was still a strong addition to the Tigers Jaw discography. While the loss of three key members would likely signal the end of any group, Walsh and Collins marched on and continued making music. Three years later, they have given us spin.

Needless to say, curious fans have been wondering how Tigers Jaws’ next chapter would unfold. While some were skeptical, the album’s first few singles “June” and “Guardian” proved to be promising signs for what was to come. With Collins and Walsh separately taking charge on both respective tracks, the band showed that even as a duo they still possess a wealth of talent. Collins’ comforting voice and smooth keyboard work make “June” a good, albeit slightly sorrowful listen. Walsh’s heartfelt yet somber lyrics shined through on “Guardian,” proving that the band still wields their touching songwriting skills. These tracks left hopeful marks for what the band would come through with, and spin as a whole has definitely put the band in a different light. The opening track “Follows” showcases how much the band has changed over the years. Though the track still carries the somber, personal aesthetic that their earlier work was known for, Tigers Jaw seems to have cleaned up a bit. The pristine production has polished their sound to a great extent. In terms of production alone, Tigers Jaw have come a long way since their lo-fi tendencies on 2006’s Belongs to the Dead. The sound of spin is much more dense. On top of this, Walsh has noticeably improved as a singer. While Walsh could always hold his own on earlier records, his vocals sound more professional here. His voice is crisp and soothing, creating a comforting tone. Walsh and McIlwee always had fantastic vocal harmonies, though he and Collins also have strong chemistry, such as on the track “Blurry Vision” where both vocalists transition back and forth in a steady, natural fashion.

All of these elements come together to create a poppier sound for the band though the lyrics still hit that personal note that Tigers Jaw has always excelled at. Tracks like “Favorite” and “Bullet” feature lyrics that seem pained even by the band’s standards. Along with this, the fourth track “Escape Plan” holds some of the most melancholic themes found on the entire album. While the lyrics themselves are left up to interpretation, the duo definitely seems to be at a crossroads here. There is a hint of uncertainty found in this song, as if the band seems unsure of the future. This emotional theme comes off different than what was found in Charmer. While that album focused on the group’s departure, “Escape Plan” resembles the band’s current state. It seems now that the band has moved on from the unfortunate loss of several members, the duo are somewhat unsure of what the future holds for them. It’s a bittersweet moment for the band considering that they have survived this hardship but now appear uncertain as to where to go from this point. These feelings are further exemplified on the closing track “Window.” The lyrics on “Window” sum up the entire album’s themes of fear for the band’s next step. Walsh sings of being afraid to change but even more so to stay the same. At this point, the band seems to still be cautious of what the future has in store for them. Despite this, Tigers Jaw still have a sense of optimism in their music. Although they have experienced these struggles, they have successfully continued on and have proven how capable they are as musicians.

Despite only being a duo, Tigers Jaw still create a hearty sound which is the result of much work in the studio. With that in mind, this extravagant effort might actually make some fans shy away. The extensive studio work has given them the aforementioned poppier sound and this change might divide longtime listeners. The stripped down, indie style has always given Tigers Jaw an undeniable sense of charm and the prettier, more meticulous production is a newer facet for the band. For example, the track “Same Stone” has a more straightforward pop sound that the band has only flirted with in the past few years. It’s a new look for the band, though it leaves many doors open for what path they might go down for future projects.

Spin is definitely a new chapter in Tigers Jaw’s progression. It’s not the same indie rock style found in their earlier work but the band has evolved into their own unique form. As a duo, Walsh and Collins still craft moving songs that will connect with many listeners. Now that the band has shown that they can move on from their initial struggles, the future holds a plethora of possibilities for them.

Cain Miller is an aspiring writer who hopes to work his way up and gain notoriety for his material. Having written about film, television, music, and sports, Cain is always looking to gain as much experience as he can and continue to improve his writing abilities.
@cainemiller
Previous Album Review: Civil Youth – Conversations
Next Gallery: You Me at Six at Pointfest in St. Louis, MO on 5.13.17