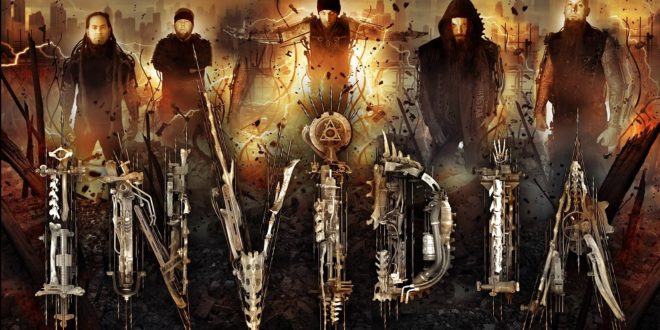 Invidia has officially announced the addition of Evan Seidlitz as the newest member of the band, replacing vocalist Travis Johnson on the upcoming “Screaming Black Curse” tour with All Hail The Yeti and supporting act Broken Rail. Seidlitz is no stranger to the frontman spotlight, known for his work in Vyces, Thrown Into Exile, and Grimace. Though Johnson is leaving to fully invest in his role as bassist of In This Moment, the band is very excited to begin this new journey with Seidlitz and has no doubts that fans will be pleased with what he has to bring to the table.

When asked about Johnson’s departure, Invidia stated: “We respect Travis’ choice to honor his commitment to In This Moment but it left us in a tough spot. It’s hard for us as well – Travis is family and is part of the Invidia story. We are beyond happy that Evan was interested and fits in so well in the Invidia camp. He’s a guy we all know well and the band as well as the fans are in great hands. We sincerely hope you will all welcome Evan to the fold like we have and come see us on tour this summer!” Johnson added: “It was a really tough choice for me to step back from fronting Invidia. I love singing and am so proud of  ‘As the Sun Sleeps’. Invidia is family to me. I mean, I just cant be in two places at the same time and I had to honor my commitment to In This Moment. I can’t imagine a better fit than Evan. It was actually a suggestion I had brought up to the band. I truly hope all of the In This Moment fans who have supported Invidia welcome him to the band. It’s a tough one knowing someone else is singing my tunes but I can’t see myself holding Invidia back.” Seidlitz said: “When Matt Snell called me up and asked me to join Invidia full-time, I didn’t have to think very long about it before I said ‘yeah let’s do it’. I knew I could no longer keep a commitment with Vyces. The guys in Vyces as well as Travis have been nothing but supportive in my decision. Travis did a wonderful job on the album vocally and I look forward to singing these songs every night on tour.”

The tour will begin this week on May 17th in Los Angeles at the notorious Whisky A Go Go and wraps up on June 4th in Fullerton, CA. For more information on Invidia and upcoming tour dates, CLICK HERE.

The “Screaming Black Curse” tour is sponsored by Schecter Guitar Research and Black Hope Curse Clothing. At each date, fans can enter to win a Schecter guitar! A winner will be selected at the end of the tour, so fans should arrive early at each tour stop to enter. In addition, Black Hope Curse will be at select dates giving away clothing and other merch.

Invidia gave fans a first listen of As The Sun Sleeps a day before its release on Huffington Post. The debut album – which is officially available in stores and online via Steamhammer/SPV – is streaming now, HERE.

Earlier this year, the band premiered their first ever music video for lead single “Feed The Fire” on Loudwire. The band also gave fans another taste this month by unveiling the title track on Metal Insider. Since the release, the supergroup has garnered much attention from fans and critics alike, leading them to a strong victory in Loudwire‘s ‘Most Anticipated Release of March’ poll. The band was able to overcome some major competition from Body Count, Art of Anarchy, Mastodon, Bush to name a few.

It may sound trite, but Invidia is truly a brotherhood. Each member of this brotherhood has a story that reflects the quote above. When they came together to make As The Sun Sleeps, they knew just what they didn’t want and how far they were willing to go to make it work on their terms.

Vocalist, Travis Johnson has been a bassist with the band In This Moment for years. His devotion to music and lack of limitations on himself brought about the desire to sing. He had tried his hand at lead vocals with other groups, but when Guitarist Brian Jackson – formerly of Skinlab and producer Logan Mader (Once Human, Machine Head) came calling, he knew that the material they were putting together was an unmissable opportunity. Brian was between Skinlab records and the material he was writing started going in a different direction. Calling upon his friend Travis to collaborate, the pair wrote 3 songs in 3 days. Fulfilling their promise to work together, they brought their material to Logan upon his return from tour to enhance what they already had. As Brian, Travis and Logan were tracking, Bassist, Matt Snell (ex member of Five Finger Death Punch), asked them who was going to play bass for the group.  “You” said Travis, who had been in a band called Flatline with Matt. Matt brought with him a drummer who had been a local friend in Sparks, NV. With a drumline background, Darren Badorine proved himself with the group.

Each of the members of Invidia have had obstacles to surmount… have been hit hard by elements of life in the world of music. Travis applied his love of Rocky movies to the band’s story. “I’m big on the underdog succeeding – on the fact that you are never out of the game… never too far from winning.” he explained. Coming together showed them that moving forward didn’t have to be so hard – because they would do it together.