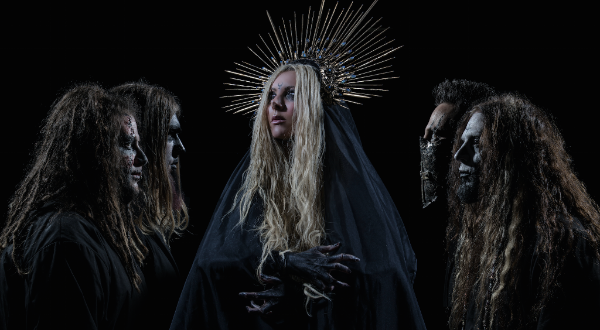 In This Moment have announced the release of their eagerly anticipated new album. RITUAL arrives everywhere on Friday, July 21.

In This Moment’s sixth studio album, RITUAL, will be released by Atlantic Records in partnership with Roadrunner Records and is available for pre-order now.

“Oh Lord” – which is also available now for streaming and individual purchase – arrives today at Rock radio outlets nationwide. The track is joined by a powerful companion video, streaming now at the band’s official YouTube channel.

Highlights include a dramatic reimagination of Phil Collins’ classic “In The Air Tonight” as well as “Black Wedding,” a walk down the aisle of musical madness that sees lead singer Maria Brink sharing the mic with legendary Judas Priest frontman Rob Halford.

“It’s like we’re going into the next realm,” says Brink. “I had a conviction of feeling empowered in my life and with myself. I always write from a personal place, and I needed to share that sense of strength. I’ve never been afraid to hold back. Sometimes, I can be very suggestive. However, I wanted to show our fans that this is the most powerful side of myself and it’s without overt sexuality. It’s that deeper serious fire inside of my heart.”

“When fans hear this, I want them to feel the music, whether they take away sadness, anger, or happiness,” adds lead guitarist Chris Howorth. “As a kid, I remember listening to records and putting them on repeat over and over again. I’d love for the world to listen and absorb this as a piece of work.”

In This Moment will herald RITUAL on a major North American tour, beginning June 20 at Peoria, IL’s Limelight and featuring support by such like-minded bands as Motionless In White, Vimic, Little Miss Nasty, and Starset. For complete details and ticket information, please visit here.

As if that weren’t enough, In This Moment are also set for two exciting support dates, joining Avenged Sevenfold on June 19 at Mt. Pleasant, MI’s Soaring Eagle Casino and Papa Roach on June 23 at El Paso, TX’s Streetfest.

The upcoming dates follow the just-wrapped “Half God Half Devil Tour,” the nearly sold out trek marking In This Moment’s first full-scale live assault since serving as special guest on last year’s blockbuster “Return of the Dreads Tour” with Korn and Rob Zombie. The band’s own hugely successful “Black Widow” headline tour included a wide range of sold out shows and stage-stealing festival appearances.

In This Moment made a stunning top 10 chart debut with 2015’s acclaimed BLACK WIDOW. The band’s fifth full-length release arrived at #8 on the SoundScan/Billboard 200, while also entering Billboard’s “Hard Rock Albums” tally at #3 – both marking In This Moment’s highest chart placement to date.

BLACK WIDOW features a string of rock radio hits, including “Sick Like Me,” “Big Bad Wolf,” “Sex Metal Barbie,” and “The Fighter.” Official companion videos – all co-directed by In This Moment’ own Maria Brink – are streaming now at the band’s official YouTube channel.

Furthermore, the title track off In This Moment’s 2012 album, BLOOD, has been certified gold by the RIAA. A remarkable accomplishment, the companion music video for “Blood” has been viewed over 27 million times.

Known worldwide for their dramatic live performances, In This Moment have received rapturous praise in a range of national outlets. “One of the most unique, diverse and theatrical live acts you could witness in heavy music today,” raved Loudwire. “Not only are they a powerhouse sonically but visually they are beyond captivating. With a bigger label backing them for BLACK WIDOW, the production, sound and overall professional level of their concert experience has been elevated.”