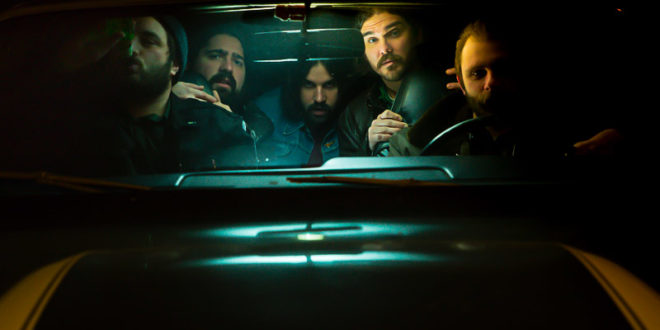 I caught up with August to discuss the making of the new album, as well as how their contributions have catalyzed the band into its present form. Ultimately, the process has not only solidified the extent of their musicianship, but their chemistry as four friends.

ME: You and Joe Laga were part of Super Snake’s revamping in 2014. What was your affiliation with the band before then?

Pete: At the time, myself and the members of Super Snake had been playing shows in separate bands together quite a bit. I was in a band called Raw Law, which was like a rock n’ roll band. Gregg, Super Snake’s guitar player, quit, and I’d always liked the dudes. I talked to Jesse [Marianni] and he was like, “Yeah, totally; come jam with us!” Joe Laga had talked to one of the dudes—I think Jerry [Jones]—and came down to jam with them at the same time, too. So, for a little bit, there were three guitarists. Then Johnny [Pinho] didn’t have time to do the band anymore, so it was just me and Joey. I didn’t really know Joey at all when we joined, but now, he’s one of my favorite dudes on earth to play with.

ME: How did the interplay between you guys really solidify as you got to know each member’s influences?

Pete: Well, at first, me and Joey hung out a lot, because one, we had to learn all of the band’s older songs, and two, we had to learn to make the sound interesting so that it wasn’t us making a bunch of noise. We’d bonded a lot over beers—it was just us at his house. When Gregg quit, he went on tour with Boysetsfire for a while. He couldn’t even show us what he’d been playing, so we had to figure it out just by listening to it.

ME: I understand that you’re both really into Sabbath, but different spectrums of their sound. You’re more of a textural player, whereas Joey’s all about the riffs.

Pete: Yeah, that’s pretty much the case. He’s into the rockin’ stuff and I’m kind of more into the doomy stuff. At first, we were like, “Man, how are we gonna make this work?” but once we started playing together, the vibes were pretty good.

ME: Even though the band’s sound had already taken shape over a period of years, were you surprised by how much you were able to incorporate individually?

Pete: It’s crazy because in the past, whenever I was in a band, I was the main guy writing the riffs. In this band, everyone writes. Every single person has a say in how the songs are curated. It’s kind of a weird dynamic—and a bit frustrating—to have five strong opinions on how a song’s going to come about. But at the same time, it comes together awesomely. We’re stoked on the end result, and we try to look past the process being annoying as hell when writing.

ME: What I gather is that in the band, there’s a lot of planning and revision before a song is fully realized. But the sound comes out as if spontaneous—this interesting hybrid of grunge, new wave and metal. Do these ideas come together just from jamming, at least initially?

Pete: Usually, how it works is one of us brings a riff to practice, and then we jam on it until it takes shape. Then, we start adding more parts to it. It could be anything. For example, Jesse might come in with a swamp metal part, and then it just never ends up sounding like how it came to the table, you know?

ME: That approach really ends up benefitting your new album Leap of Love. Clearly, there’s been a bit of a revolving lineup over the years, but you’d always learned to make something of it. What is it about this album in particular that resonates with you in a big way?

Pete: When we were recording, I had no idea about the parts I was going to play on everything. I kind of had like nine different parts for every part of a song. So, we’d just change all of them and pick whichever sounded best that I’d wind up playing live now. It’s cool because we’re all very open to experimenting with pretty much anything. I think that’s how the band flies; the whole vibe of the band is that each of us gets something to say.

ME: It sounds like a mass of sounds on the surface, but the skeleton that holds those elements in place is fluent and well defined.

Pete: Cool, thank you! It all just comes very naturally. A lot of the times, one of the dudes comes up with a riff, we jam on it, then another dude has a riff that kind of flows into it. They just take shape on their own without really having to be forced out.

ME: Yeah, right off the bat, there’s the anthemic title track, “Lie4U,” which has a bit of a Martin Phillips and the Chills vibe, and “Hot Pavement” is reminiscent a lot of Alice In Chains. Besides finding that stylistic variety, how did you work out its sequencing?

Pete: When all was said and done, I think we had about 15 songs. Jerry really helped out with segues and making the whole album flow. I think once you’d listened to once song, you can listen to another and hardly tell it’s the same band, but you’d still figure out a way to make it flow. So, when you listen to the whole album, it makes sense.

ME: In the end, this otherwise extreme presentation of songs all comes out cohesive.

Pete: Yeah, even just recording the album was a surreal experience. Our good buddy Kevin [Antreassian], who plays in Dillinger Escape Plan recorded it. When we approached him about it, we had done a bunch of albums, and all of our previous bands had done stuff with John Ferrara at Portrait Studios. He also plays in Trophy Scars, and Trophy Scars do everything on their own—very DIY. Both of our EPs were recorded by John, but in this album, we wanted to do it in a super weird way.

Kevin owns a hunting lodge in Roanoke, Virginia; this big property—huge! He was super down with us going over there and just experimenting, having a portable recording rig. John had a bunch of stuff, but we were like, “You know what? It would be cool to just change it up anyway and see how Kevin’s take on our band would go.” So, we recorded it all in a big cabin, pretty much on the top of a mountain. It was very surreal.

ME: The environment must have really enhanced the process.

Pete: Yeah, it ended up great because our cellphones didn’t work, so nobody was checking their Instagram feeds. We were all just focused on getting it done, and just hanging out and spending time. I think locking ourselves from any interference that kept us from thinking straight made a difference. None of us are very focused dudes, so this at least kept us on track.

ME: After making the album, how do you and the band feel about it? Since it’s been out, it’s definitely gotten you the recognition.

Pete: We’re super happy with it! We haven’t had a chance to tour on it yet because of some logistics, but we’re planning to late summer. I was laughing with the guys recently because the other band I play in gets a good amount of press as well, and there’s always at least one or two terrible reviews no matter what. I can’t find any! I want somebody to write a terrible review, but there’s none; I don’t know why. Maybe you should write one and tear us apart (laughs)!

But so far, everyone seems to vibe on it and we like how it came out. It’s not about worrying about record sales; it’s about being able to document a specific point in your life. We’d spent a good, solid year writing it, and it was earlier this year when the record came out. I’d like to think of it as a photograph proving we did something. There’s nothing about it that I would change.

ME: Overall, that was a great experience you guys had.

Pete: Oh yeah! We’re all super close since writing that album. We’ve been playing those tunes for a while, and now we’ve started writing for the next one already. We think the next batch is going to be so much better. It’s a little bit more of a straightforward vibe, but the songs are pretty hard hitting and we’re stoked.

ME: What’s next for the band?

Pete: We have a music video dropping in the next two to three weeks for one of the tracks on the album, and it’s really weird, but also incredible!

I come from a family who is passionate about all things music. I learned to sing at an early age, and by 13, had my very own Fender Strat guitar. I tried my hardest at learning all that I could. Because I was born with cerebral palsy, I had to teach myself an adaptive playing style. I learned to write and record my own music, despite these difficulties. In college, I started making great use of my writing abilities by reviewing music, as well as copy editing. I guess it's best to stick with what you know, while welcoming a fair challenge at the same time.
Previous The Jazz Head Collective
Next Gallery: Palaye Royale at Dingbatz in Clifton, NJ 05.07.17