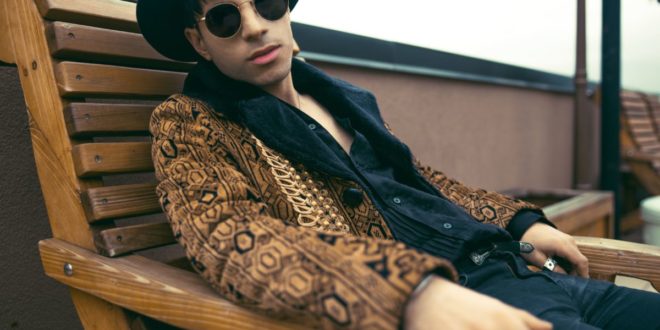 Brooklyn based one man band Sheare is about to release his EP Turbulence on May 12th which deals with heartache and overcoming it. Recorded in his own home studio during a dreary January, Sheare delivers a five track record that is guaranteed to satisfy. Recently I had the chance to talk with Sheare about the post holiday blues, putting out music independently and a look behind his album cover.

1.After releasing a handful of singles you decided to jump in and write and record an EP. What was behind that decision?

I knew that once I had finished two of the songs that ultimately wound up on the EP, I still had more to say. By the time I finished the third song, It was apparent that there was a consistent theme that carried throughout the new songs. It felt like a body or work vs just singles I was going to release over a period of time.

2.You are independently releasing Turbulence. Was that the route you always wanted to go? If so, why? If not, why?

I think so. Having the freedom to release music independently has really helped me grow and develop as an artist. Essentially I can put out new music as I finish it, which really allows me to build up my fan base and allows new fans to discover and rediscover me.

3. You have a recording studio in your home. Do you ever just record songs that have never seen the light of the day just for a pure cathartic purpose?

I do sometimes. I start with building a track, so often I’ll be listening to an instrumental of a track I’ve made for weeks before writing or recording the vocals. Usually if the vocals don’t hit me the first time, my gut tells me to discard it and move on to a new song. I think it’s more cathartic to have a finished song that I like and can listen back to.

4.You created and took photos for the albums artwork. Can you explain what the cover art symbolizes?

It’s an interesting position to be in, being a one-man band so to speak in terms of all aspects of my creative process with my music. It felt fitting I take on the art direction as well. The EP is about the dilution of a long-term relationship, so I knew the artwork needed to be reflective of the darker tone of the music.  I started taking stark, industrial pictures at night thinking maybe I’d leave them as is, but they felt they were missing something. I’m a really big fan of the clothing company Acne Studios’ esthetic, which is very minimal and uses pink with their logo so I took some inspiration from them. I think the pink rectangle of symbolic that despite a hard experience, there’s still brightness, and good and hope that comes from it.

5.You recorded this album about a breakup and its cyclical nature. Were you hoping to relate to listeners or was this purely something you created for yourself? Or is it a case of both?

I think it’s a case of both. My hope is always that what I do connects with people on an emotional level, break up or no break up.

6.You talk about recording this album during the “post holiday blues.” How do you usually do with that time of year that is hard for so many people?

It’s interesting I actually don’t mind it most of the time; it’s just not conducive to go through a break up during the dark seasons because everyone is in hibernation mode in the city, so it feels particularly bleak. Usually though I think it’s a great time of year to get to know yourself better though, ha!

7.Being Brooklyn based do you ever draw inspiration from the city?

All the time, I don’t think I’d be able to write the same kind of music in any other city. NY is my first love and a huge source of inspiration.

8.What advice would you give to people going through a tough breakup?

I think going through a break up is an important right passage on the path becoming a better person. You learn from each experience and grow from the wreckage. I think it’s just important not to lose yourself in the process of trying to find yourself again following the break up.

I’m going to put out the EP on May 12th and then begin the plan for the next batch of singles. Come 2018 people are going to be sick of seeing my name, and that’s my hope ha!

retro music enthusiast. Dreamer. Kind of odd. Writer
@twitter.com/for_no_one1014
Previous Gallery: The Pixies at The Ryman In Nashville, TN 5/5/17
Next Interview with Caleb Shomo of BEARTOOTH at Welcome To Rockville 2017