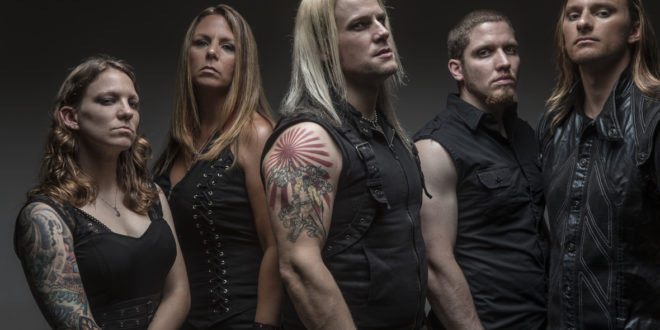 Crossing Rubicon Release Lyric Video for “Who’s Gonna Save You”

Connecticut rock outfit, Crossing Rubicon are releasing a new lyric video for current single titled, “Who’s Gonna Save You“. The single comes from the rock quintet’s 2016 full length, No Less Than Everything.

“Is there a God or not, who knows? But until we know for sure, we should respect each other or if not, the very person next to you could be the god that creates your Hell on earth. This song is a biblical style warning to people who cheat each other!”
– Scotty Anarchy

Purchase No Less Than Everything here and watch the new lyric video below.

Crossing Rubicon began as a two-man project involving Scotty Anarchy and Pete Ahern (Red China Blue). The band then enlisted, current drummer Brandi Hood shortly thereafter. Zach Lambert came on board and the group’s second guitarist. Brandi’s long-time rhythmic accomplice Jeff Diablo joined in the spring of 2010 as the groups bassist to round out the lineup. Pete stepped away from the band in the summer of 2010. Rob Dolan (ex-Dirty Blonde, ex-Hot Mess) joined to fill the lead role through four very successful shows including opening slots for In This Moment, Nonpoint, Pop Evil, and Rev Theory. In March 2011, the groups current guitarist Matt Douglas took over as the group’s permanent lead guitarist.

Success continued as the band landed opening slots for Motley Crue, Bret Michaels, and Tantric. Bassist Jeff Miles stepped away from the band in late 2013 to be replaced by the groups current bassist, Steven Riccio. Crossing Rubicon’s music is often described as a throwback to metal of the 80’s and early 90’s, as band such as Queensryche, Alice In Chains, Metallica, Judas Priest, and Iron Maiden, while having a modern rock sound.