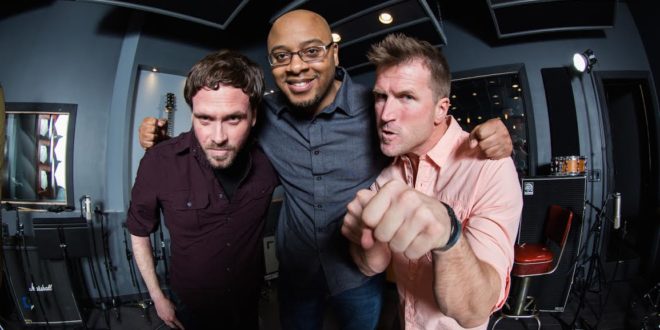 Jake Kussmaul May 4, 2017 Need to Hear, Single Leave a comment

Kenosha, Wisconsin’s Rainy Day Crush is heartily rooted in the city’s early-to-mid 90s indie rock scene. Original lead vocalist Betsy Ade and guitarist Matt Specht (ex-The Other Side) comprised its principle creative force, forming the quartet in 2002 thanks to regional success. After only one album, 2003’s Free to Go, internal tensions had split them up. However, a charity performance on their ten-year anniversary reunited Ade and Specht via two incarnations—first as the intimately acoustic duo, Candy Apple Crush, and then as the newly invigorated Rainy Day Crush, adding bassist Derek Schattl and singing drummer Mike Wynn, Jr. A year later, Ade’s departure left the band unable to find a replacement vocalist. Nonetheless, Matt, Derek, and Mike pushed forward as a trio, releasing the Calamity! EP in 2016.

At present, today marks the premiere of Rainy Day Crush’s follow-up, “No Such Thing,” the debut single off their soon-to-be-released I’m Still Alive EP. What’s presented is nothing short of an anthem, alternative aesthetics kept intact. Right away, I’m particularly impressed by its balanced production dynamics. The guitars feel meaty without being overpowering, and the sparse synth integration adds just the right touch of atmosphere. Even with the bigness of the chorus, the vocal harmonies emit a contrasting subdued quality that actually fits comfortably in the mix. To an extent, both their tonal and thematic delivery convey the predicament of loss amid a senseless, unfairly one-sided betrayal. This way, I had a moment of clarity about the band’s intention to ‘crush rainy days,’ as it were. The instrumentation emphasizes a complementary means of uplifting the listener, all the while recognizing their internal struggles.

I come from a family who is passionate about all things music. I learned to sing at an early age, and by 13, had my very own Fender Strat guitar. I tried my hardest at learning all that I could. Because I was born with cerebral palsy, I had to teach myself an adaptive playing style. I learned to write and record my own music, despite these difficulties. In college, I started making great use of my writing abilities by reviewing music, as well as copy editing. I guess it's best to stick with what you know, while welcoming a fair challenge at the same time.
Previous Interview with FIRE FROM THE GODS at Welcome To Rockville 2017
Next Gallery: In Flames at Starland Ballroom in Sayreville, NJ 05.02.17