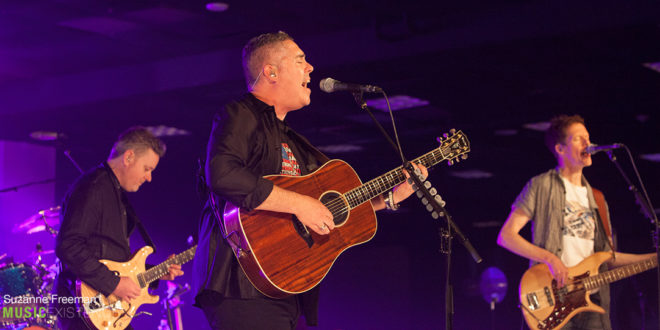 Barenaked Ladies are on tour to promote their new album Ladies and Gentlemen: Barenaked Ladies and The Persuasions. Barenaked Ladies (“BNL” for short) were formed in 1988 in Ontario, Canada. Their self-titled album was the first ever independent release to be certified gold in Canada. It wasn’t until the late 90’s that they became popular in the U.S. I enjoyed their brand of upbeat alternative rock and their live shows often featured their improv skills as they joked around during the songs.

The Persuasions are a New York based a capella group and the title collaborators on this latest offering. The album is a mix of Barenaked Ladies songs like “The Old Apartment” and “One Week” with new arrangements and new songs featuring The Persuasions. On this particular night of the tour, The Persuasions did not join them so some of the newly-arranged songs sounded different without them, especially the new version of “One Week”, where The Persuasions have added their a capella style in the background.  The addition of The Persuasions on this album was a shock to me as it’s a bit of a departure from that upbeat, almost silly style I was used to hearing in the early BNL albums. Their new style is a little more subdued.

I had the chance to see them perform in Valley Forge, PA to a sold out crowd at The Valley Forge Casino. The crowd was a mix of parents and their kids, which is always cool when you get to see that many different generations enjoying the same music.

BNL opened with the song “Boomerang” from their 2013 album Grinning Streak, and played some of their newer songs early on,  wrapping up their set with fan favorites like the “Theme from the Big Bang Theory,” “One Week” and “If I had $1,000,000.”

You can catch up with them on tour in a city near you.

Fun Loving Music Photographer and lover of live music in general. I am most likely to be spotted with a coffee in one hand and a camera in the other, somewhere in Philadelphia, New York City and everywhere in between. For more of my music photos: http://myphotos.bellemorephotography.com/
@bellemorephoto
Previous LANY announce The LANY Tour: Part 2 + Debut Album “LANY” available June 30th
Next Highly Suspect Announce New Tour Dates & Reveal “Little One” Music Video