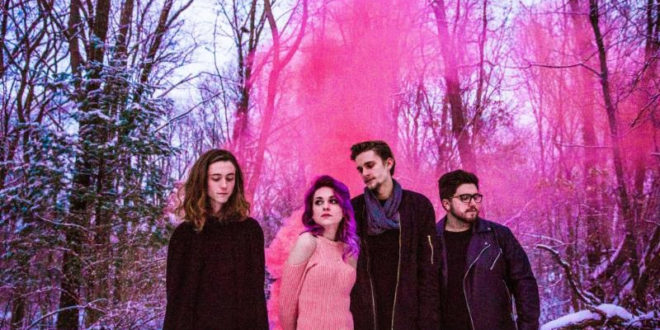 Lilac Lungs debut album Eventide will be out May 12th, and in a word it is a stunner. Switching back and forth between ethereal and more rock/alternative songs the band has come out with a record that other musicians would kill for.

Though the more ballad type of songs are beautiful in their own right, this reviewer found herself a bit more attracted to the bouncy alternative tracks that really showcase lead singer Emily Torres’ vocal abilities which put her in the league of Paramore’s Haley Williams.

Anxiety and depression are a large theme covered on the LP but it is never more felt than on “Guard Dog.” It has an atmospheric opening akin to a black hole swallowing one up before the pop/alternative melody kicks in. Torres speaks about shortness of breath and honestly puts forward the notion that “the real danger here is anxiety.” What Lilac Lungs does so well is putting a dark subject matter in front of a peppy melody. It’s a toe tapper but with a deep undercurrent and that in itself is something that makes this track standout. Lilac Lungs have created a pretty accurate depiction of dealing with anxiety and fear which will make it wholly relatable to many listeners, connecting with their fans. Towards the end there are layered vocals that give the tune an even more dynamic sound and round out the genius of the tune. It’s definitely one of the highlights of the LP.

“Welcome to the Fallout” is full of clever rhyming schemes on the verses such as “left with a bad taste/got to pick up the pace/face what I have inside.” Once again it is about examining one’s self through rocky patches and has an edgy rock attitude that is most clearly heard on the energetic chorus. It is here where Torres voice shines the most on the entire LP, passionate and lovely full of emotion. “Fighting my chills,” Torres sings and goes back and forth between slower and a more sped up delivery throughout the entire song. This seesaw effect mimics the lyrics that Torres is putting forth full of rawness. At times Torres even uses a whispered tone with an echoed effect to get the songs message across even more as she gives listeners some words of advice of seeking out people who “fear all the things you do.” It’s powerful and definitely will leave a lasting impression.

The absolute best moment on the entire record is “Fine.” It’s our first introduction to the duel side of Lilac Lungs. It has an electronic background groove that one can’t help but bop their heads along to. The lyrics are spot on “she sleeps with her boots on in case the hurricane in her head breaks down the levy,” Torres starts the song off with, but the chorus has a much more positive look in which she repeats that things are going to be “just fine.” Torres’ vocals are strong and there’s a slightly 80s pop vibe here, sort of a classic Madonna mixed in with current Paramore sound and the result is spectacular. It’s the type of song that will get stuck in ones head and the cheerful outlook despite Torres acknowledging that life is full of dark times is a welcome change. All around it is a perfect tune and has the makings of being a big hit for the band.

It’s rare that a band comes out with such a strong debut, so check out Eventide and tell all your friends about this band before they become a household name.