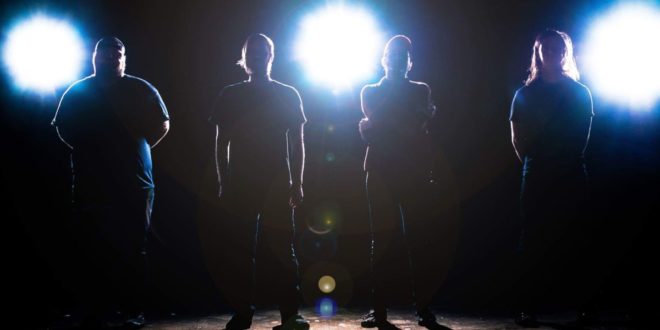 There are some bands that play it safe in an effort to hit mainstream charts, win awards, and sell out for an extra dollar. American Standards is not one of those bands. They are an in-your-face hardcore punk/metalcore band that is breaking rules, taking risks, and making their own unique mark in the music world.

Formed in 2011, American Standards is a hard-hitting, emotionally and politically charged hardcore punk unit from Phoenix, Arizona. Employing a blistering blend of metal, punk and thrash the quartet released its powerhouse debut “Still Life” in 2012 and immediately went on to share the stage with bands such as Every Time I Die, Norma Jean and The Dillinger Escape Plan. American Standards quickly became known for their intense live show, tongue in cheek demeanor, and relentless work ethic playing over
250+ shows to date.

Since then, the band has released two independent EP’s and will release a full-length album called Anti-Melody on April 28th. Based on recent interviews with the band, the release will continue to build upon sociopolitical themes, corporate greed, satire and materialism but will also have a much more personal tone.

“What started as social commentary on the growing divide in our society became very personal when our founding guitarist (Cody Conrad) passed of suicide and then soon after, my father of cancer,” said vocalist Brandon Kellum. “We went back in to re-write much of the album and in a lot of ways used it as therapy to deal with the experiences. Although very personal, at its core Anti-Melody is centered around the universal theme of separation on many levels.”

Anti-Melody is an amazing compilation of interesting themes and fierce sounds that form a unique and impassioned album. I was drawn in just from the song titles – “Carpe Diem, Tomorrow,” “Church Burner,” “Bartenders Without Wings,” and “Chicago Overcoat” to name just a few. The album is kicked off with the first single “Writers Block Party” which is about the vulnerability of producing music that doesn’t necessarily fit the preconceived notion of what is popular for a particular genre. It’s basically a fuck you to the idea of conformity. The song “Cancer Eater” is a heart wrenching tribute to losing a loved one to cancer. It has the same subversive feel as the rest of the songs on Anti-Melody, but at its core is something far too many people can actually relate to. This is the type of musicality that makes Anti-Melody brilliant.

Every song on Anti-Melody showcases the fierce vocals from Brandon Kellum that command you to listen and the frantic instrumentation from Corey Skowronski (guitar), Steven Mandell (bass) and Mitch Hosier (drums) that hits you right in the chest. This is an album that can’t be ignored. Buy it here on iTunes.