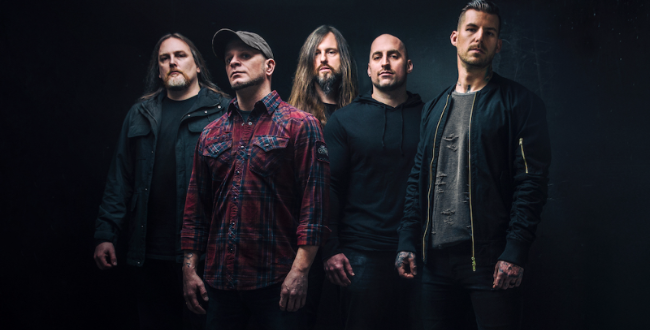 All That Remains & Benghazi Veteran, Kris ‘Tanto’ Paronto, Team Up For “Madness” Video

Tomorrow (April 28, 2017) marks the release of hard rock juggernaut ALL THAT REMAINS’ highly-anticipated eighth studio album, MADNESS. The New England-based band will release their new opus, produced by Grammy nominated Howard Benson (Halestorm, Papa Roach, Chris Cornell) via Razor & Tie. The material has already seen massive success, reaching #1 at metal radio with the first few singles and nearing Top 10 in the US Active Rock chart– which can be heard in heavy rotation on Sirius XM’s Octane and Liquid Metal. Immediately following the release of MADNESS, All That Remains will kick off their US Headlining “Madness Tour” including select shows supporting Five Finger Death Punch, Korn and Motionless In White.

All That Remains vocalist and ex-Marine, Phil Labonte, has been outspoken on many current political and social issues and never shied away from using his voice in support of fellow veterans. The melodic, lyrically intense title track, “Madness” showcases the range of Labonte’s vocal ability, perfectly capturing the urgency he sees in our need to be more supportive of our veterans.

Today the band has unveiled a powerful and emotional music video for the song starring Army Ranger, Benghazi veteran, and speaker – Kris ‘Tanto’ Paronto.  Paronto is a former Army Ranger from 2nd Battalion 75th Ranger Regiment and private security contractor who has been deployed throughout South America, Central America, the Middle East and North Africa. He also worked with the US Government’s Global Response Staff conducting low profile security in high threat environments throughout the world.  Paronto was part of the CIA annex security team that responded to the terrorist attack on the US Special Mission in Benghazi, Libya, September 11th, 2012, helping to save over 20 lives while fighting off terrorists from the CIA Annex for over 13 hours.

The “Madness” video will offer a helping hand to veterans through its support of two vital organizations – Paronto’s The 14th Hour Foundation and The Boot Campaign. Labonte couldn’t be more thrilled with the video and partnerships, sharing, “We are excited to present the video for Madness. With the help of our friend, Kris Paronto we hope to call attention to the veteran community and the effects of Post Traumatic Stress. There are places you can call if you need someone to talk to. Reach out to the community and you’ll find the shoulder you need.”

ABOUT THE 14TH HOUR FOUNDATION:  The 14th Hour Foundation was founded by Kris Paronto or “Tanto” as he is affectionately known in security contracting circles. Tanto knows firsthand that the greatest needs of our fine heroes often occur in the months and years following their mission or fight – in their “14th Hour”.  The 14th Hour Foundation is committed to raising and dispersing funds to help the lives and futures of Veterans, Military Contractor Personnel and First Responders that have served and sacrificed to protect the American Homeland. Proceeds from this charitable fund provide assistance in the form of Honor Grants for those unexpected everyday life events that other government programs may not cover. These may include: utility bills, help with rent, vehicle repair, burial costs and help with college tuition. Additionally, the 14th Hour Foundation partners with other veteran organizations to increase awareness of veteran-related issues and to provide for veteran support services.  Administrative overheads are kept very low so more donation dollars go to those needing assistance.

ABOUT THE BOOT CAMPAIGN: Established in 2009, Boot Campaign began as a photo project and quickly evolved into a more proactive way for Americans to show their patriotism. Charitable donations were gathered and made through a donor advised fund until 2011, when Boot Campaign became a 501(c)(3) charitable organization.  Boot Campaign is dedicated to promoting patriotism for America and our military community; raising awareness of the unique challenges service members face during and post-service; and providing assistance to military personnel, past and present, and their families. Retail sales of combat boots, apparel and mission-focused merchandise, along with general public donations and corporate sponsorships fund programs that support military families. These efforts extend to all generations of military personnel who endure significant physical, emotional and circumstantial hardships resulting from their service and sacrifice.