Home / News / OUTSIDE LANDS FESTIVAL’S 10TH ANNIVERSARY SET FOR AUGUST 11-13 With Metallica, The Who, and Gorillaz to headline.

OUTSIDE LANDS FESTIVAL’S 10TH ANNIVERSARY SET FOR AUGUST 11-13 With Metallica, The Who, and Gorillaz to headline.

San Francisco will host the Tenth Anniversary of the Outside Lands Festival later this year on August 11-13, 2017, and will be held at the beautiful Golden Gate Park. The festival organizers Another Planet Entertainment, Superbly and Starr Hill have shared the lineup that will be headlined by Metallica, The Who, and Gorillaz. Other great acts include Lorde, A Tribe Called Quest, ALT-J, Queens Of The Stone Age, Above & Beyond, Fleet Foxes, Empire Of The Sun, etc. Check out the lineup below.

Not only will this Bay Area celebration have one of the best lineups we’ll see this year, Outside Lands will also offer ticket holders access to great food, wine, beer, art and comedy. Over 80 local restaurants, 40 wineries, and 30 breweries will be represented at the festival.

Get your tickets while you can, this festival has sold out the last 6 years and will be in high demand. You don’t want to miss out! Three day passes and single day tickets are available through their website, https://www.sfoutsidelands.com.

Previous In This Moment Announce Summer 2017 Tour Plans
Next Interview: Hannah and Maggie 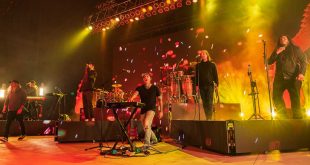