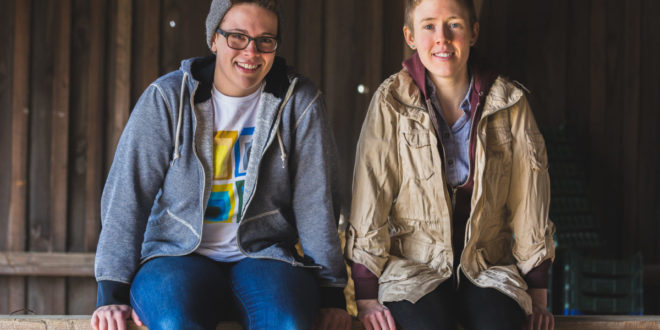 Duo Hannah and Maggie, who reside on the east coast, are ready to release their fourth studio album Oh No out May 19th. They have been compared to Simon and Garfunkel and The Indigo Girls and their live shows have gotten rave reviews. I recently got the chance to talk with the girls about crowdfunding, tour memories, and other topics.

1. Oh No is your fourth studio album. What lessons have you learned from recording your past three albums that helped you make this album?

— All of our past albums came together under very rushed circumstances. We’ve learned that just because we’re excited about something doesn’t mean everyone has to hear it RIGHT NOW. As a result, the whole process with this CD has been more measured and thoughtful. Possibly the biggest lesson we’ve learned is that good music isn’t enough. You can write the best LP of all time and it doesn’t matter if no one is going to listen. It took us a while to realize how much goes into a release beyond recording, mixing, and mastering. This time around, we’ve been more purposeful about PR, making music videos, and reaching out to people who’ll help spread our music (hopefully!) farther and wider than it ever has.

2. You crowdfunded Oh No. What made you decide to go that route and what was your experience like?

— Crowdfunding, when it works (which in our case, thankfully, it did!), affords an artist so much more freedom. The money from our campaign has truly helped us realize an artistic vision that is entirely our own. We were so moved to see the number of people who donated to the campaign. It’s hard to recall another time in our career when we’ve felt so bolstered and supported. It also adds another layer of pride, putting this album out, to know that it couldn’t have happened without the many amazing people who donated.

3. You have been compared to Simon and Garfunkel. How does that make you feel? Do you ever feel pressure to live up to the positive reviews you’ve been given?

— Great! We’ve definitely leaned in to that comparison because it’s so flattering. Of course we feel the need to deliver a solid performance every single time we get on stage. But, not so much because of the comparison to Simon & Garfunkel. These days, it’s incredibly easy to create high quality recordings, even if you have no talent at all. We’ve sat in the recording studio and watched our producer fix tiny errors in pitch or timing that would’ve ended up on an LP twenty or thirty years ago. So, when people come to our shows, we want to wow them. We want them to know that we are who we say we are. We want to be better than they expect.

4. You have said ” As an artist, the silver lining to heartbreak is the idea that, although painful, it may be the catalyst for new creation.” Have you ever turned to other artistic mediums to create something beautiful out of something painful.

— Yes! We sell a chapbook of Maggie’s poetry alongside our CDs. Hannah is currently seeking a publisher for her first novel. We’re both what you might call compulsive creators.

5. Do you draw any inspiration for your music from living in New York? If so, what inspires you about New York?

— Well, technically only Hannah lives in NYC, in Astoria. Maggie is in Grad school in Western MA. Sure, the city’s frenetic energy is an inspiration. The same could be said of the little creek across from Maggie’s house in the woods.

6. What is your best tour memory?

— H: All my favorite tour memories have to do with how touring allowed us to see the natural beauty of America. There’s nothing like driving 13,000 miles to get a sense of how geographically diverse America is. Probably my favorite memory of all was driving through the Avenue of Giants in Northern California. It had always been a dream of mine to see the redwoods, but they so vastly exceeded my expectations, I could barely breathe. As for a favorite tour gig: we once played an outdoor stage on a mountain in Park City as the sun set. It. Was. Perfect.

M: I’m with Hannah on this one. Some of my favorite tour memories involve really long drives across really beautiful landscapes. In 2013 we had the pleasure of crashing with a friend who was working as a park ranger in the Grand Canyon. I had never seen it before and we arrived after the sun went down so I decided to wake up at dawn and watch the sun rise over the canyon and it was just about the most incredible thing I’ve ever seen.

7. What albums are you looking forward to being released in 2017?

M: Fleet Foxes is coming out with an album after a bit of a hiatus and that makes me extremely excited.

8. What is one musician or band you wish more people knew about?

H: Good question! Do people know about Barnaby Bright? They’re a married couple and I swear the woman, Becky Bliss, has one of the most heartbreakingly beautiful voices you’ve ever heard. Speaking of great voices, people should check out our friend Britney Ann down in Philly.

M: We have a good friend named Jake Klar who everyone should be listening to. He’s an extremely talented musician and a really sweet guy, and we’ve been really lucky to have shared a handful of wonderful and intimate shows with him over the last few years.

9. What is the last record you bought?

H: I’m Alone, No You’re Not by Joseph

10. What do you hope your fans take away from Oh No?

We just want to write music that makes people feel something. Maybe sad, maybe happy, but something. Apathy is the easy way out, but the only way we can make this world even a little bit better is to connect with ourselves and each other. There’s a lyric in our new song “to whom it may concern” that goes: “I try every day/ to fight the urge to cover my ears and turn away/ of all the things I hear people say/ my favorite’s ‘love love love.” That just about sums it up.

Check out the music video for “Back to Town” here:

retro music enthusiast. Dreamer. Kind of odd. Writer
@twitter.com/for_no_one1014
Previous OUTSIDE LANDS FESTIVAL’S 10TH ANNIVERSARY SET FOR AUGUST 11-13 With Metallica, The Who, and Gorillaz to headline.
Next Gallery: Testament at The Culture Room , Ft. Lauderdale, FL 4.13.2017