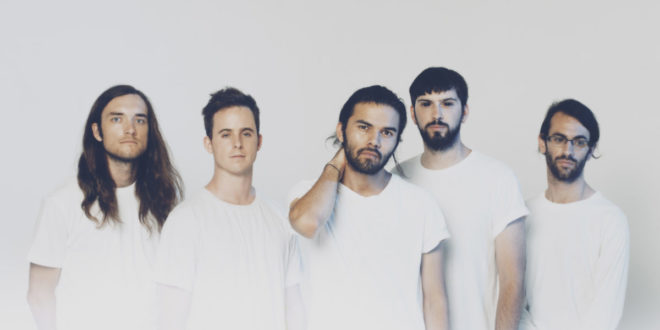 Australian metal band Northlane have returned with their surprise album Mesmer which continues to showcase their ever-evolving sound. Northlane’s first two albums, Discoveries and Singularity, were fairly straightforward metalcore projects but the band took a more progressive approach with their 2015 release, Node. Northlane have continued with these musical risks into their latest album which signifies a solid evolution for the band.

The first few tacks, “Citizen,” “Colourwave,” and “Savage” all feature some fluent guitar work and pleasant contrasts between the screamed and clean vocals. The complex instrumentation, particularly the noteworthy bass work of Alex Milovic, draws comparisons to other progressive metal acts such as Between the Buried and Me. These moments definitely prove that Northlane are moving in a more ambitious direction. From the beginning moments, it is clear that Northlane are not necessarily aiming for the same grittier metalcore one might find from an act like Cancer Bats, or older material from All That Remains. While that sound is good in its own right, Northlane strive for a more polished approach to the metal genre. Mesmer has a distinctively clean sound for a metalcore project which highlights its more progressive elements. It is a sharp, technical work of metal that features a crisp presentation.

While the first half of the album is commendable on its own, Mesmer truly lives up to its potential starting around track seven, “Zero-One.” This is one of the most well-constructed songs on the entire album thanks to the band honing their progressive rock elements. “Zero-One” takes its time and gradually transcends into a more grandiose work of metalcore. Nic Pettersen’s tight drumming paired with Marcus Bridge’s fuzzier vocals create a curious tension that eventually builds to a heavy piece of metal. The following track, “Fade,” features a nice backing rhythm section, thanks to the solid riffs of Josh Smith, that leads into an explosive chorus. Bridge impressively shows off his vocals here, reaching both the upper levels of his register as well as the deeper growls of his screamed moments. The instrumental opening to the track “Render” is fantastic. Petersen’s drumming is once again on full display, especially the focus on his cymbals. When Petersen’s work is layered over Jon Deiley’s powerful lead guitar, the track emits a force of chaotic instrumentals which again work well when countering Bridge’s higher pitched vocal chops.

The tenth track, “Veridian,” has an uncharacteristically pretty sound to it which works in contrast with its darker, more metalcore-friendly lyrics. The performances here are all phenomenal, even compared to the high standards the band has created for themselves all throughout the album. The rhythm section yet again creates a pulsating sensation that gives the track a jolt of life and Bridge’s singing transitions from clean to screamed work in flawless fashion. The final track, “Paragon,” has one of the best buildups on the entire project, focusing on a mechanical, almost science-fiction opening, before breaking through with its aggressive instrumentation. This energy carries on throughout the track before calming down and bringing the album to a close.

The main flaw with Mesmer ultimately falls on its production. While not inherently bad, the production sometimes mixes the vocals and instrumentals too closely together. The heavy instrumentals occasionally drown out Bridge’s voice, especially in the first few tracks, which makes the album a muffled listen at times. This specifically flaws this album because the tracks are so technical and layered and it seems that some of the details might be lost in the production. With that in mind, the album is still a good listening experience. The production is still clear enough so that listeners can make out the creative song structures Northlane put forth.

Northlane should definitely be proud of Mesmer because it successfully progresses from the ideas they’ve been experimenting with in the last couple of years. This album shows that Northlane are moving in a respectable direction, evolving from their metalcore roots and working towards ambitious goals. If Northlane continue along this path, they could very well find themselves as one of the biggest acts in their respectable genre.

Cain Miller is an aspiring writer who hopes to work his way up and gain notoriety for his material. Having written about film, television, music, and sports, Cain is always looking to gain as much experience as he can and continue to improve his writing abilities.
@cainemiller
Previous Gallery: Highly Suspect at The Pageant in St. Louis, MO on 4.21.17
Next Evee drops new lyric video for debut single, “Lone Wolf”